Generosity and Community, but Blunt. 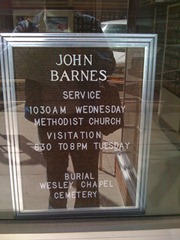 This series of posts comprise my reflections on the life of my grandfather John Barnes. The first entry is here.

A few years after John and Helen married, Eastern Kansas was struck by a pretty severe drought that left their small family in dire straights (since John was a farmer).  They were unable to pay their gas bill, but the owner of the station knew John and extended him credit for over a year until they could harvest a good crop and begin to recover from the drought.

When I first heard this story, I was overcome by the generosity of the store owner.  Such an act of kindness is far from commonplace in my culture.  Credit is offered by VISA and MasterCard, not by a local business owner, and we don’t do business with the same persons often enough that they know our names, much less vouch for our honesty and work ethic in so tangible a way.

That singular act of generosity is a window for me into John’s world; he and my grandmother were unfailingly generous as well.  I remember snippets of conversations overheard by my young ears – discussions between my mother and her brothers about some loans Grandma and Grandpa had made.  I never really knew the persons in question nor did I fully grasp what had actually transpired (I was far to busy exploring the barns or swimming in the lake to be troubled by such grownup concerns), but I do remember that they always seemed to give more than most everyone else thought they should.

I also remember when a good friend of theirs was finally dying.  Her husband had long since died, and she had no children to care for her (whether she had never had children or they were not there for some other reason I never knew), so my grandparents cared for her for a long time, visiting her several times every week and helping her to put all her affairs in order.  Small town gossip being what it is, several persons in town began to speculate that they were trying to weasel into her will.  I’ll never forget that my Grandma looked  at me and said, “I don’t know how anyone could think such a thing.  She’s our friend.”  John simply nodded his agreement.

That was John Barnes to me.  He didn’t say much.  And when he did speak, it was straight to the point (for instance, when I got my first tattoo – Hebrew on my left forearm – I knew instantly that he was not thrilled.  He asked me what it said, and when I started to tell him, he cut me off by exclaiming, “It says bulls*** to me.”  That was the first time I ever heard him cuss.)  For most of my life, I’d always taken his gruffness to be a sort of sullen anger – as my mother pointed out in her funeral reflections, he always could throw a good fit.  But in retrospect, I realize that John was just a simple man.  Not intellectually; as my uncle Jim said, “He didn’t say much, but he didn’t miss much either.”

No, I wonder if John’s simplicity was a sort of embodied honesty.  He worked hard.  He loved well.  He lived in a community that respected hard work but that caught you when you fell.  And he didn’t see much point in trying to be anything other than what he knew.

There’s an authenticity there that many of us are missing.  The communities in which we live have become so detached, so disembodied that we now have to seek out those experiences that were part-and-parcel of John’s every-day-life.  And we’re having to learn to be real in a way that he never did.

John wasn’t perfect; far from it.  And that’s the point.  If you knew John, you knew him flaws and all.  He never had a conversation about ‘taking off masks’ or ‘tearing down walls’ in his community.  I’m not sure those conversations would have even made sense to him, so far are they removed from his lived experiences.

It makes me wonder what we have to learn from actual communities actually living in community.  Where your loss is my loss and your win is my win.  I wonder what we can do to begin to reclaim that level of honesty in our lives.  I wonder how we can move back towards an embodied sense of community.

A Man of the Land