Film Refractions: Away We Go 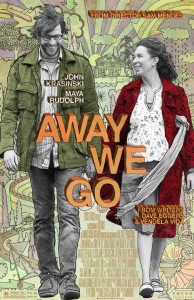 Away We Go is one of those quirky indie comedies that is actually funnier than it is jaded.  We accompany Burt (John Krasinski) and Verona (Maya Rudolph) on their journey to find a home for their soon-to-be-born child.  Maya’s parents died when she was in college and Burt’s announce to the couple that they’re finally moving to Belgium like they’ve always talked about (which sounds strange until you actually see the parents – played superbly by Catherine O’Hara and a Harry-Dunne-All-Grown-Up Jeff Daniels).  Turns out Burt and Maya moved to town because of Burt’s parents, and since they’re leaving for two years, the couple has nothing to hold them back.

So away we go!

Thus begins a round-the-country roadtrip that whisks us around to the various friends and family around whom the couple are considering settling down.  We meet former bosses, siblings and college best-friends, all played by a slapdash mixture of minor celebs who give the movie it’s requisite awkward-indie-movie-too-vulgar-for-theaters-but-still-hilarious-and-yet-somehow-heartwarming charm (Maggie Gyllenhaal’s neurotic, stroller-hating cousin had Amanda and me in tears).

But the heart of the film belongs to Krasinski, who plays Burt to perfection.

We learn early on that Burt desperately wants to be a good father.  In one early scene, Verona wakes to find Burt carving a stick.  She asks what he’s doing and he replies that he’s “cobbling” because he wants to be THAT dad who knows how to do stuff and who teaches his kids how do to fun outdoors-y stuff (Verona does correct him, pointing out that cobbling is making shoes, while he’s carving or, at best, whittling).  Burt’s anxiety is not fueled by an irrational paranoia or attempt to make up for his own family’s shortcomings (in fact, both of them seem to have had good, decent families).  It’s just the natural anxiety that any soon-to-be-father experiences, and the film lets Krasinski model it beautifully.

Perhaps the most interesting commentary the film makes is on the institution of marriage.

We learn that Burt desperately wants to get married – has for some time, in fact – but Verona is resolutely opposed because she doesn’t see the point.  And while the film doesn’t go out of its way to show us dysfunctional marriage after dysfunctional marriage (the healthy probably outweigh the bad, in fact), marriage as an institution is presented as a tertiary concern to two people who are in love.  What truly matters is life-long commitment and deep, abiding friendships.  If you have these, who needs an ‘official’ marriage?

Subtle as it is through the rest of the film, this critique builds and builds until the end of the film, when Burt and Verona make an emergency trip to Miami to see Burt’s brother, whose wife has just walked out, leaving him alone with their daughter.  In Burt’s confusion, hurt and grief, he proposes desperately to Verona once again and she resolutely turns him down.  But what follows is a sort of marriage ceremony in which they each beg promises from one another – “Promise me you’ll never leave this baby,” or “Promise me you’ll never become obsessed with sea horses.”  Each answers the other in turn, “I do.”

I left the film a bit sad.  Marriage is meant to be a picture of God’s faithful, covenantal love with the Church and yet our culture – which has been arguably ‘Christian’ since its founding – has reached the point that the strongest, most lasting covenants are imagined outside the institutions, detached from any sense of faith community.  The celebration of marriage as a reflection of God’s love for us has become a nice afterthought precisely because we don’t take it seriously enough.

Our sense of covenant is little more than a cave in which vows echo faintly if at all, dim and distant whispers of words spoken on our wedding day.

Away We Go is right to critique that sort of hollow institution; it’s a pale shadow of what it was meant to be in any case.  So while I didn’t agree with the film’s estimation of the value of marriage and the importance of covenant, I couldn’t disagree with its critique of what our culture has made them.