I Must Be Crazy

This is the final installment of The Beard Goes Home, a chronicle of my trip to Israel, Cairo and Rome from November 3-18.  If you want more information on a picture, hover your mouse over it for a pop-up caption.  If you want to see a bigger version of the picture, click on it.

Over the course of this trip, I have traveled to three continents, engaged three major world religions and more interacted in at least a half-dozen cultures.  I’ve been further outside my comfort zone than ever before in my life, and all in the name of following Jesus.  Of walking where he walked and seeing the things he saw, as much as possible.

I was certainly without most of the comforts of home – I was much less connected to the Internet than I’m accustomed to, and between that and the 6-7 hour time difference, I felt very disconnected from my wife and community in the US.  I met new persons every day, and all of them were in some way the Other.  I learned that two weeks is more than long enough to spend adrift and apart, with no place to put down roots.  I understand now why we create colonies, little islands of our own culture, when we go to a new place.

I learned that I’m a lot more xenophobic than I thought I was.  I spent the whole trip as the consummate outsider.  Even Thomas was at home among his Dominican brothers; each of our rest stops offered something familiar for him, a place he understood and knew how to function in.  Initially I only felt a sense of shame at my suspicion towards the Arabs or my indignation at the disgust I felt from the Jews.  My fear of being alone in Rome.

But the longer I’ve been gone, the more I’m trying to cherish these uncomfortable moments.  I am learning in a way I never have before what it means to be a Stranger, an Alien.  Amanda and I chose ‘Forasteros’ as our last name because it is the Spanish word for this very idea.  Because we both want to be that and to learn the art of hospitality, of welcoming strangers and aliens.

In Middle Eastern cultures (Jewish, Muslim OR Christian), there are two categories of person (as I was just discussing with one of my new Dominican friends): Family and Enemy.  The Arabic phrase for ‘Welcome’ roughly translates as ‘I make smooth the path for you to come into my family’.  If you’re not a part of my family, then you’re my enemy, and I have full freedom (and possibly even an obligation) to cheat you.  I certainly don’t have to welcome you.

This makes the Biblical mandate to welcome the stranger even more powerful.   As the Israelites were preparing to enter into the Promised Land, Moses reminded them:

For the LORD your God is God of gods and Lord of lords, the great God, mighty and awesome, who is not partial and takes no bribe, who executes justice for the orphan and the widow, and who loves the strangers, providing them food and clothing.  You shall also love the stranger, for you were strangers in the land of Egypt. – Deuteronomy 10:17-19

This would be a radical teaching in the Holy Land today.  It was at least as radical then.  If we’re honest with ourselves, it’s radical in the good ole’ U.S. of A. too.  We’re not much better at making strangers feel welcomed in our country, let alone our homes.  Especially if they don’t speak our language or look like us.

But welcoming the stranger is fundamentally what it means to follow Jesus.  His Incarnation is the ultimate sojourn.  God became human.  He took on flesh and moved into our neighborhood.  And we killed him for it.  Which only goes to show that God’s commands to God’s people didn’t take hold very well.

And we who follow Jesus today aren’t any better.  We still play favorites.  We still stick close to our families (whatever we decide those look like) and we do little to step outside our comfort zones.  We usually actively avoid it.  Intentionally becoming a stranger is difficult.  It’s not a vacation (which is why we build resorts that have all the comforts of home but still let us feel exotic).

And yet again and again the New Testament appropriates the metaphor of stranger/alien/sojourner to describe the Christian life.  We are on a journey in a foreign land. 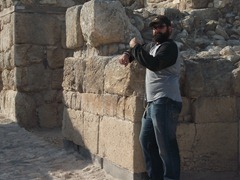 All of these died in faith without having received the promises, but from a distance they saw and greeted them. They confessed that they were strangers and foreigners on the earth, for people who speak in this way make it clear that they are seeking a homeland.  If they had been thinking of the land that they had left behind, they would have had opportunity to return.  But as it is, they desire a better country, that is, a heavenly one. Therefore God is not ashamed to be called their God; indeed, he has prepared a city for them. – Hebrews 11:13-16

Here’s the end of my story: I took a trip and it turned my world upside down.  You should try it sometime.  If you want a tour guide, let me know.  It helps to travel with friends.