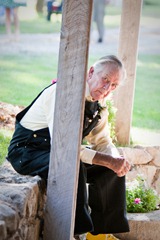 John Barnes died on Sunday, March 20 at 2:30 am, Central Time.  He died on a hospice bed in the living room of the house he’d occupied for nearly 20 years, surrounded by his wife and two of his four children.  He was 82 years old (b. December 19, 1927) and had lived in Mound City, Kansas his whole life.

He was, among many other things, my grandfather.

And he was, among many other things, a farmer.  A man of the Land.  I learned a lot about my grandpa in the process of his death, and in the next few posts, I want to reflect on what I learned about and from him in the last few weeks of his life.

John grew up farming with his father and brother, and after he married Helen in 1950, they struck out on their own.  Soon, John bought a lime truck and began hauling lime.  His days soon looked like this:

Wake up before dawn, take lime truck to quarry and start hauling at dawn.

From the stories I heard, Grandpa started out with pretty much nothing.  He worked sometimes 20 hours per day and was at the mercy of the Earth.  Some years there were drought; some years they had less.

For a man like John Barnes, the amount of work he did was directly proportional to how much he had.

This is not the world in which we live today.  The world of Office Space in which we do just enough not to get fired.  We live in a world of salaries and benefits, a world in which we are told we ‘deserve’ a certain amount based on how much education we have or the persons we know but – very rarely – the quality of work we do.

For the vast majority of us, job reviews or performance evaluations are a joke.  For John, a poor evaluation was his children’s growling stomachs.

One thing I’ve always remembered about my grandfather was that he didn’t take what he didn’t earn.  No, that’s not right.  He was a very generous man, and he had received generosity often in his life (more on this in the next post).

He accepted gifts and generosity without expecting them.

He worked as hard as he could and never felt entitled to anything.

And that’s something I took away from my grandfather’s death.  Somehow we in my generation have developed a strong sense of entitlement.  We feel the Earth owes us something, that the mere fact of our existence entitles us to health and wealth.

Our culture has become increasingly disembodied, ever further detached from the Earth that was created to sustain us.  In the hours I spent with my grandpa just before and after his death, I was able to peek into a different world, a different culture.

“And to the man he said, “Since you listened to your wife and ate from the tree whose fruit I commanded you not to eat, the ground is cursed because of you. All your life you will struggle to scratch a living from it.  It will grow thorns and thistles for you, though you will eat of its grains.  By the sweat of your brow will you have food to eat until you return to the ground from which you were made. For you were made from dust, and to dust you will return.”