The Beard Goes Home is an ongoing chronicle of my trip to Israel, Cairo and Rome from November 3-18.  If you want more information on a picture, hover your mouse over it for a pop-up caption.  If you want to see a bigger version of the picture, click on it.

After our visit to Masada, Thomas and I drove North through the West Bank to the Galilee.  We stayed in Tiberius, on the Southern end of the Sea of Galilee.  Because it was a Roman city, Jesus probably never went there (no pious Jew would have).  Ironically, today the city is a favorite weekend getaway for many of the Orthodox community in Southern Israel.  The next morning, we got up ready to experience the places Jesus spent most of his time ministering.

Whether you follow John’s chronology (which has Jesus visiting Jerusalem at least three times, and possibly as many as five) or the Synoptics’ (Matthew, Mark and Luke, in which Jesus visits Jerusalem only once, and it kills him), Jesus spent most of his days ministering in the Northernmost part of the country – the region surrounding the Lake of Galilee.

Capernaum became his home base – probably because Peter and Andrew lived there.  Capernaum was a tiny village (as most of the towns on the Galilee were) whose Hebrew name was Kfa Nahum – the village of Nahum; in Greek (the language all four Gospels were written in), it became ‘Capernaum’.  Because it was the first town a person coming into Herod Antipas’ territory (from his brother, Phillip’s territory) reached, there was a taxing station, which was probably where Jesus called Matthew (Mark 2:14).  Because this was Jesus’ home base, he did tons of miracles here.  He healed the centurion’s servant, the hemorrhaging woman, and Peter’s mother-in-law, along with many other unnamed people (Matthew 8:5-16).  Plus, Capernaum had a synagogue (which the non-Jewish Herod Antipas had built for the Capernaumites because they were so poor).  A man named Jairus was a prominent leader in this synagogue – Jesus raised his daughter from the dead (Matthew 5:21-43).  He also cast demons out of a man in this synagogue (Luke 4:31-36).

They’ve excavated much of Capernaum, so you can now see the 4th century synagogue built on top of the one where Jesus would’ve worked (but you can see in a corner the first-century excavation!  You can also see the first-century homes, which don’t have roofs anymore because they were made of thatch – which you could cut through and lower someone down (Mark 2:1-12).

Peter’s home – and the room in which Jesus healed Peter’s mother-in-law – is excavated and protected by a massive church that has been built on stilts over the site.  You can look into the room itself, which is a pretty incredible feeling.

Very near Capernaum is the Church of the Multiplication of the Loaves and Fish.  In case that is unclear, this church preserves the rock on which Jesus miraculously fed 5,000 (Mark 6:34-44).  The site is less than a 20 minute walk from Capernaum and sits at the bottom of the Mount of the Beatitudes where Jesus (probably) gave his famous Sermon on the Mount (Matthew 5-7).  The Sermon on the Mount is one of Amanda and I’s favorite passages of Scripture – it is the theme of her tattoo sleeve and she has the whole thing memorized! – so needless to say, the Mount was a particularly special place for me.  The Church on the grounds is a small but beautiful octagonal building (to represent the 8 Beatitudes) and the grounds themselves are a beautiful, well-kept garden looking out over the Galilee.

where Jesus made himself known to Peter and the Beloved after his resurrection (John 21).  Again, being at this site provided me with some amazing perspective.  Peter had been a fisherman before Jesus called him.  After Jesus died, Peter – crushed and defeated – returned home to the only other trade he knew.  He and some other disciples sailed out from Capernaum and, because they weren’t catching anything, had sailed a few hundred yards down the shoreline.  A man cooking food on the shoreline called out to them, told them throw their nets on the other side of the boat, and when they did, they began to haul in a miraculous number of fish. 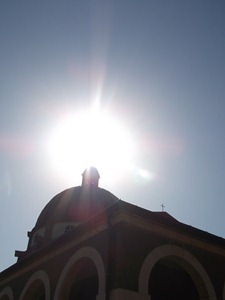 Peter realized right away that it was Jesus, so he dives in and swims for shore, leaving the other disciples to bring the boat.  He gets to shore and is confronted by Jesus.  Because Peter denied Jesus three times, at this site Jesus asked Peter three times if Peter loved him.  When Peter said yes, each time Jesus told him to take care of Jesus’ sheep.

The church preserves the rock on which he cooked their breakfast is preserved in the church, and I found it to be a great place to pray for everyone I have the privilege of serving as a pastor.  To be entrusted with the responsibilities I have as a minister has been an awesome privilege, and I found walking in Peter’s footsteps to be a special, unique experience I’ll treasure for a long time.