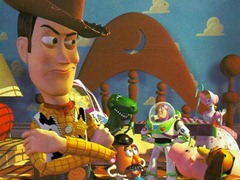 It’s become trite to say Pixar can’t make a bad film.  So it’s probably no surprise to anybody that Toy Story 3 is great.  But words really do not do this film justice.  Pixar has demonstrated that its films are starting to mature (remember UP?), and in this regard, TS3 follows suit.  Andy is off to college, the toys haven’t been played with in years and the question is raised: what happens now?  The toys are adrift – if Andy doesn’t need them anymore, what is their purpose?  What does it mean to move on in our lives?  How do transitions change what it means to be a family or community?  Can we learn to forgive, or will we become angry and bitter?

TS3 dives head-long into these issues.  The toys end up at Sunnyside Daycare; it seems at first to be a toy’s paradise, but dark secrets smolder just beneath the surface.  Can the toys escape and make it back to Andy’s house before he leaves for college?  Do they even want to escape? The story in and of itself is beautiful, gripping, hilarious and tragic.   Were this all the film gave us it would still be an incredible viewing experience.  But we get to travel with the toys as they learn what it means to move on, to change and, yes, to outgrow our childhoods.  We learn how important it is to have a purpose and the incomparable power of a community working together.  We see the beauty of friendship and the promise of redemption.  We laugh till our sides hurt and shriek in horror at Big Baby.

I understand that kids will probably love this movie, but don’t kid yourself.  Pixar made this film for adults.  Not because it’s filled with innuendo (::ahem:: Shrek) but because the toys’ journey is the journey of the child growing up.  The student leaving for college.  The parent saying goodbye.  The mentor passing on a legacy.  These are adult journeys that Pixar has treated with the utmost respect and grace.  And somehow they’ve managed to do so while making you laugh so hard you’ll pee your pants if you’re not careful.

Bottom line: TS3 is enjoyable on every level. Go see it. But brush up on your Spanish first.

Trust me on that last part.