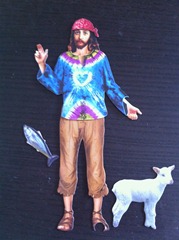 Poor Hippy Jesus.  He’s all about Peace and Love, but for some reason everyone just loves to pick on him.  He was born all the waaaaaaaaaaay back in the early 1900s (if you can even imagine such a ludicrous time) when a group of Western intellectuals decided they should apply Christian ethics to contemporary social ills.  Where they’d get such a radical idea is beyond me, seeing as the real Jesus never mentioned anything about caring for the poor.*

Hippy Jesus really grew to maturity towards the late 1970s, after the sexual revolution and the polarization of the American political spectrum.  The Church was not exempt from that polarization, and it was during this time that Evangelicalism became a force to be reckoned with, thanks to the likes of the Moral Majority, Focus on the Family and Petra.

Christians quickly found it very important to know whether a person was ‘liberal’ or ‘conservative’, with both sides demonizing the other.  Hippy Jesus got lumped in with all the left-winger because he thinks we should care about poor people and the environment and tends towards pacifism, among other things.

These days, Hippy Jesus is just as divisive as he’s ever been.

He’s hip and cool, has all the latest gadgets and is very socially conscious.  He’s usually sporting TOMs Shoes and loves American Apparel t-shirts (either that or TWLOHA).  And he has his fair share of enemies.  You might here a pastor rant about other pastors who are too metrosexual or people who are all caught up in the ‘Social Gospel’ at the expense of the ‘Real Gospel’.  Sometimes the debate gets downright ugly, and surprisingly Hippy Jesus doesn’t seem to mind.  For all his talk of love and acceptance, he can actually be pretty exclusive.  He does well with those he’s supposed to care about (you know, the poor and people like that), but when it comes to Christians who disagree with him, he tends to get a little bit…

…well, judgmental.  Condescending.  When he’s just with friends, he can be downright mean (in a hilarious way, and besides, the real Jesus reserved his harshest words for the religious people of his day, so it’s totally cool).**

It’s really easy for Hippy Jesus to get caught up in causes, to ignore Jesus’ death and resurrection (which are, after all, pretty violent).  But we have to remember that without the empty tomb, all our efforts to improve the world are in vain.  Without God’s final and decisive victory over sin and evil, the world would still be doomed.

Hippy Jesus would also do well to remember that the Gospel really is for everyone and that includes his enemies.  After all, if he’s really going to be a pacifist, he has to make sure that his grace extends to them too.

Have you encountered Hippy Jesus?  What are your thoughts about him?

* A person can only believe this statement if s/he has never actually read more than about four words Jesus says.

** Yes, if there was any doubt in your brain, this is another of my personal favorite Jesuses.