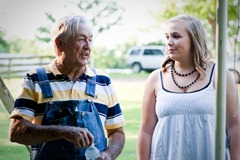 Third in my reflections on the life of my Grandfather, John Barnes.

In my last post, I recounted John’s work ethic – that as a young husband and father he frequently worked up to 20 hours per day.  Even as a young boy, I remember going with Grandpa to the rock quarry where he worked.  My siblings, cousins and I would spend hours climbing the giant piles of lime and gravel while John filled trucks and ran the quarry.  When we returned to the farmhouse (and, later, the house by the lake), John would spend hours outside, tending to his garden or fishing.

Even after he finally retired, he spent countless hours out in the Mound City community,   And while John certainly played well – he was almost always up for a game of Rook or Old Maid – I remember most that he worked.  And in the last few years, when he got more and more sick, and just couldn’t get out and work anymore, it stole away his soul.  It wasn’t a dramatic sort of thing.  He just gradually became more and more miserable.

John was a worker, and when he couldn’t work anymore, a real and important part of him died.

Such were my thoughts as I stood under a tent at the Wesley Chapel Cemetery, surrounded by my family, all of us facing the casket that held John’s body.  I thought about John the farmer.  I thought about Adam the farmer.  And the words of Genesis 3 rang in my mind even as the minister declared, “Ashes to ashes; dust to dust”:

“Cursed is the ground because of you; in toil you shall eat of it all the days of your life; thorns and thistles it shall bring forth for you; and you shall eat the plants of the field.  By the sweat of your face you shall eat bread until you return to the ground, for out of it you were taken; you are dust, and to dust you shall return.” 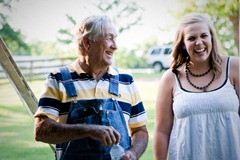 John worked hard.  And in this, he participated in the story of Adam, the story that is our story.  By his own toil and sweat he brought forth life for his family and – through his generosity – to his community.  And in this way, John also participated in the story of the second Adam.  John’s love for those around him was evident despite his gruff exterior, and he worked hard, he sacrificed for his loved ones – his friends and his family.

So as I stood, watching his casket, tears flowing down my cheeks even as rain kissed the canvas over our heads, I recalled for myself what the writer of Hebrews said concerning that second Adam, whose own labors on behalf of us, his beloved, are finished:

“Under the old covenant, the priest stands and ministers before the altar day after day, offering the same sacrifices again and again, which can never take away sins.  But our High Priest offered himself to God as a single sacrifice for sins, good for all time. Then he sat down in the place of honor at God’s right hand.”
— Hebrews 10:11-12

I wept for my loss, for my mother and grandmother and family.  But I understood what it means to mourn as those have hope.  John was adamant that his death be marked with celebration and I left the graveside overcome by joy rather than sorrow.  Because after a long life full of work, John Barnes was finally at rest.

“So then, a sabbath rest still remains for the people of God; for those who enter God’s rest also cease from their labors as God did from his.  Let us therefore make every effort to enter that rest.”
— Hebrews 4:9-11