No one sets out to be a villain, so what do you do when it turns out you’re on the wrong side of your own story?

Everyone is the hero of their own story. But we can’t deny the role we play in the inevitable pain we encounter in our lives. How can we know if we’re playing the villain? Empathy for the Devil investigates many of the famous villains of the Bible to learn how they became the “bad guys” of their stories. By tracing their path to sin, we can learn to see how we have walked the same paths, and how villains can find life in God’s rescue.

Ever since Gregory McGuire’s WICKED showed us the “other side” of The Wizard of Oz, we’ve been fascinated by the villain. From Dexter and Walter White to the Joker and Ultron, we love to see people be bad. Something about the humanity of these villains both frightens and attracts us. As much as we want to believe we could never be like them, how can we be sure? The dark truth is that there’s a villain within each of us.

The same is true of Biblical villains. When we read the stories of Cain, Pharaoh, Herod or Judas, we too-easily gloss over them, assume they’re monsters and focus on the heroes – Abel, Moses, Jesus. We forget that the villains of the Bible all started out just like us – people who bear God’s image. We pretend they are fundamentally different from us.

If we are not careful, we make the same choices as those infamous villains. In small ways, we commit the sin of Cain, the sin of Herod, the sin of Judas. And because we are blind to their stories, we follow unwittingly in their footsteps.

Empathy for the Devil invites us to hear the stories of these villains. To understand them, so that by learning how they became the villains they are, we can see better how far down the same roads we’ve gone, that we might turn and go back the other way, toward life.

What’s in the Book? 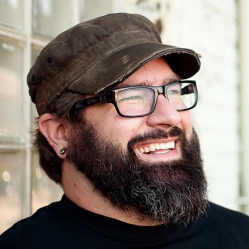 JR. Forasteros is a popular blogger and ordained elder in the Church of the Nazarene. He recently left a position as the teaching pastor at the 1,000+ member Beavercreek Church of the Nazarene in Dayton, Ohio. He now serves as co-lead/teaching pastor at the 250+ member Catalyst Community Church in Dallas, Texas. In his decade of full-time ministry, he’s cultivated a reputation for thoughtfully presenting both Scripture and popular culture with clarity, humor and insight. He connects to those who are both inside and outside the Church, frequently building bridges between the two groups.

JR.’s call to ministry manifests as gravitation towards those outside the Church, those usually deemed villains by the religious. Over the years, JR. has developed great empathy for these outsiders, and that empathy has formed a bridge for many to see God working in their lives. His current church, Catalyst, is for those outsiders, that they might understand how much God loves them and how they can receive the life Jesus offers.

JR. is one of editors and senior contributors at NorvilleRogers.com, which receives more than 50,000 unique visitors per month. He also cohosts several podcasts, including StoryMen (history, pop culture and theology), Bible Bites (Sunday School for the 21st century), Pour Over Theology (Wesleyan Holiness Theology through a Feminist lens), Origami Elephant (religion and philosophy through the lens of current events) and Don’t Split Up (horror films). Together they receive more than 1,500 monthly downloads. He has also contributed to Prodigal Magazine, RelevantMagazine.com, MinistryMatters.com and FaithVillaige.com. His unique perspective on TV, film and literature have made him a go-to for many Christians learning to engage popular culture.

JR. Forasteros preaches 35 Sundays out of the year for his congregation in Dallas in addition to coaching his lay preaching team. He also works with area pastors to develop sermon series, content and delivery. He’s been invited to speak at Shepherd Church of the Nazarene in Columbus, Ohio and at the Fall Revival at Mount Vernon Nazarene University, where he spent a week with over 1,000 college students. His sermon podcast has over 100 subscribers.

JR. Forasteros’ unique ability to illustrate biblical truths with engaging, relevant examples from popular culture, and to understand and critique messages said popular culture is sending using clear biblical teaching, has made him a prominent voice among those Christians who want to incarnate Jesus faithfully without condemning or ignoring the culture around us.