In this series, I’m exploring a recent series of ad campaigns by PETA.  The ads are striking for their use of nude (or nearly so) minor-celebrities to creatively and cleverly promote various aspects of animal rights.  The first post explored PETA’s use of sexually suggestive imagery and text such that the models are dehumanized and thereby relegated to the moral level of animal.  The second post dealt more specifically with the “Angels to Animals” campaign in which (I argue) PETA misappropriates Christian religious imagery and language (the cross, rosary, concept of ‘savior’ and others).

In one regard, I believe I have not clearly communicated my intentions in this series of posts.  I do not believe that PETA is engaging in this advertising campaign maliciously.  I want to argue that these ads are indicative of larger cultural trends: we are dehumanizing ourselves through our (mis)use of sexuality and we are losing the unique and significant meanings of our Christian symbols.  PETA is not a Christian organization and so has no reason NOT to undertake this campaign. From a non-Christian perspective, the ads are, frankly, brilliant.  But more on THAT in the last post (coming next week).

The Eve of a New Day

Today, I want to focus on one last ad-campaign with which I’d like to dialogue: the “Turn Over a New Leaf” campaign.  The text of the ads is fairly innocuous by itself – ‘turning over a new leaf’ is a common idiom in our culture for trying something new, and the ads suggest that we try Vegetarianism.  So far, so good.  But I find fascinating how they’ve chosen to use their models.  Here are model/actress Pamela Anderson and actress actress Maggie Q.  Both women’s essential parts are covered in lettuce leaves, and they bear an uncanny resemblance to Eve, our first mother who gets a bad rap for – well, most of the rest of Western History.

Why use Eve?  She’s a complicated figure even within the Biblical text, and 6,000+ years of human history has only made her more complex.  Today she is both an object of scorn and a paragon of feminist virtue, an uber-woman who long ago escaped the texts in which we meet her to roam across our culture leaving a powerful impression.  For some Feminists, she’s become the ultimate example of choosing to embrace advancement against the threat of patriarchy.  As Lilian Barger argues in Eve’s Revenge: 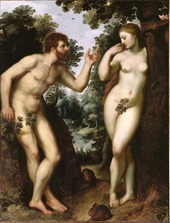 This act of eating forbidden fruit has in recent years been seen as a ritual of empowerment within feminist theology.  In this reinterpretation, the first woman is said to have been exercising power over her own life and challenging the existing order.  Through ritual eating of an apple we follow the first woman in an act of subversion, encouraged to overthrow the oppressive patriarchal power that has dominated us (136).

Is it a stretch to see in these ads this Eve, this empowering symbol?  I don’t think so; in fact, to use Eve in this way is clever and subversive in its own right.  Cruelty of any kind is often viewed as a male trait, albeit a lesser, undesirable one (see, for instance, the writings of Grace Janzten).  Vegetarianism, on the other hand, is often touted for its many health, ethical and social justice benefits.  It’s a short step from there to imagine that vegetarianism is, well, a little bit more evolved than omnivorism (quick shout out to my Veggi-minded friends who have never once made me feel this way for enjoying my steak!). 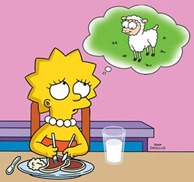 This model of Eve is not the most healthy or helpful model available to us.

This rebel-against-patriarchy is not the most helpful picture of Eve.  In fact, I think the Genesis 2 narrative offers both men and women a more helpful answer to patriarchy.  I don’t have space for a full exegesis here, but briefly:

Genesis 1:27 reveals that the image of God is both male and female – that neither is complete without the other, and that both are necessary to embody the fullness of God’s image.  Genesis 2 affirms this by stating that “It’s not good that the man is alone.”  Woman is introduced as the man’s ezer, a Hebrew word that means ‘ally’, ‘partner’ or even ‘savior’ in other biblical texts.  It’s not until Genesis 3 we see hierarchy (read: patriarchy) introduced into the text.  As a result of the Fall, God tells the woman that her “desire will be for the man and he will rule over you.”  In this reading, patriarchy is the consequence of our choice – both Adam and Eve’s.  And more importantly, it’s a choice that is reversed at the Cross.  The church is meant to be a place in which gender is no longer linked to power (as Paul points out in Galatians 3:28).

So what’s wrong with the PETA ads?

Is PETA buying into the image of Eve-as-rebel?  I think so.  The message I see in these ads is a call to reinvent yourself in your Mother’s image, as a Vegetarian (is this a subtle appeal to Ken Hamm’s pals?).  Our path to overcoming patriarchy and (re)creating ourselves as stronger, moral persons runs through the Cross.  We don’t recreate ourselves, reverse the curse we brought down on ourselves.  We are renewed, regenerated, recreated through Jesus, who is even now making all things new. 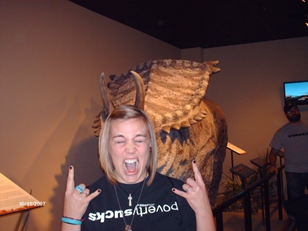 Of course, I don’t fault PETA for not creating advertisements consistent with a Christian worldview.  They’re not a Christian organization.

I wonder what might happen if we try to recover Eve as a model not of rebellious or anti-religious womanhood, but as a model of good and pure humanity, an example for both men and women to follow?  A model of a person who chose unwisely, but who through self-sacrifice and faith can be rescued from death.

Truthfully, I’m not sure a PETA ad inspired by that Eve would look a whole lot different.  So maybe I’m reading too much into these ads.  But they’ve at least given me pause to reflect on my own idea of gender roles.

To what sort of Eve are you drawn?  Does she figure prominently (or at all) in your theology or spirituality?

Next time: I want to take a step back and reflect on the issues this series has raised.  I’ll talk about what I really like in PETA’s ads and a bit more generally about what I think a healthy Christian response should be.