If I’d reviewed this film when I first saw it, my quest to review all the 2010 Best Picture nominees would be a lot further along. Here we go anyway… Oh yes, and spoiler alerts. 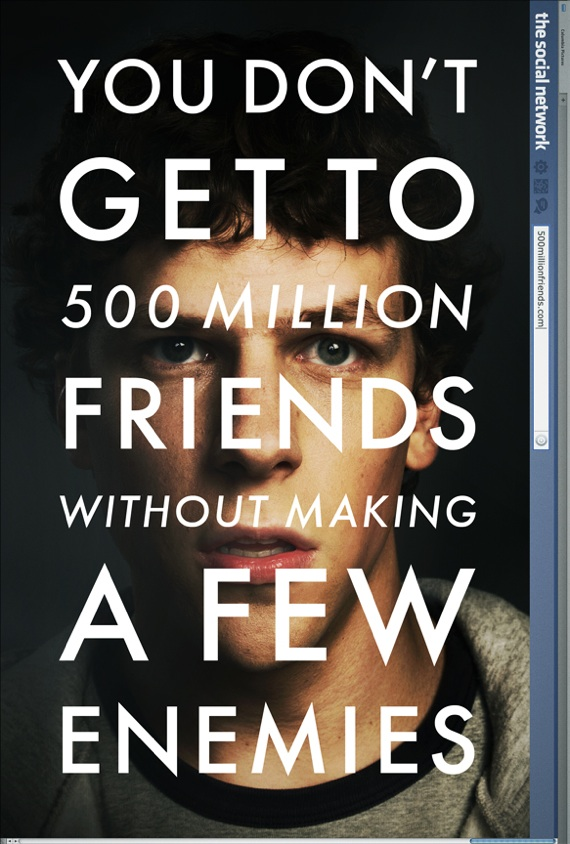 The Social Network is David Fincher’s latest film (Se7en, Fight Club, The Curious Case of Benjamin Button), and is penned by Aaron Sorkin (A Few Good Men, Sports Night, The West Wing, Studio 60). It chronicles the creation of Facebook (if you don’t know what Facebook is, then you’re probably either reading a printout of this review or you are an alien preparing an invasion and I don’t want to give you any more advantages than you clearly already have). The entire story is an adaptation of Ben Mezrich’s The Accidental Billionaires, which he wrote relying mainly on Eduardo Saverin (played in the film by Andrew Garfield), Mark Zuckerberg’s best friend at Harvard, who in the present is one of two groups suing Zuckerberg for stealing Facebook. As such, you’d expect the film to be more critical of Zuckerberg, but it’s not. Even still, much has been made about how fictitious the Zuckerberg in the film actually is. Jesse Eisenberg didn’t ever meet Mark Zuckerberg. From all accounts, the awkward, anti-social misanthrope we see in the film is light-years from the warm, funny (and maybe still slightly awkward) Zuckerberg who actually runs Facebook.

Sorkin tells the story in flashbacks cut between deposition hearings with Zuckerberg and either Saverin or the Winklevoss twins – two hulking Harvard rowers who were seniors when sophomore Zuckerberg started the Facebook. Both Saverin and the Winklevoss twins claim that at some point Zuckerberg stole Facebook from them, so we are taken back to Harvard of 2002-2003 to see for ourselves. The twins claim to have came up with the original idea to make Facebook available only to select colleges through a dating website called Harvard Connect they contacted Zuckerberg to build for them. Saverin was the original CFO (and sole financier) of Facebook, and was tricked (though, according to the flim, legally tricked) into signing away his shares by Zuckerberg and Sean Parker (the Napster founder who had wormed his way into the Facebook inner circle).

The story itself is pretty straight forward and fun to watch. Sorkin’s dialogue brings the characters to life. His script keeps the characters from becoming parodies of themselves while allowing us to experience the thrill of watching underdog-nobody-dork Zuckerberg triumph over the nefarious Winklevi who clearly have everything – money, smarts and good looks to spare. But you don’t completely hate the twins and you can’t completely love Zuckerberg. Saverin is the betrayed friend while Parker is the self-destructive cool-kid whose too immature for his own good. 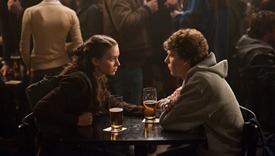 As the movie poster  hints, the movie’s central theme is the false intimacy Facebook promises. The film opens with Zuckerberg getting dumped by his girlfriend, Erica Albright, in a bar and going home in a drunken pity party. His drive to become cool led him to put the entire college social experience online in the form of Facebook. The irony is that as the popularity of Facebook grew, Zuckerberg became more and more of a celebrity, but didn’t connect with anyone on a meaninful level. In fact, he grew futher and further apart from his best – and only – friend, Eduardo Saverin. The film ends with Zuckerberg alone in the deposition room refreshing Erica’s Facebook page, waiting to see if she’ll accept his friend request. Mark might have over 1,000,000 friends, but he’s completely alone.

The real question is this, though: is the film a commentary on the false intimacy social networking offers us, or on the false reality film offers? Because the real Mark Zuckerberg doesn’t bear much resemblance to the film at all. The real Mark Zuckerberg has had the same girlfriend since he founded Facebook, and everyone who knows him describes him as a warm, friendly person. So while The Social Network is an interesting parable about the dangers of false intimacy, we would do well to remember that film is just as fickle a mistress.