I have always been fascinated by post-Apocalyptic worlds. Whether films, TV or books, I love tales of humanity in a world where we lost it all. But missing from most post-apocalyptic worlds is something basic to human nature: religion. Herschel waxes religious occasionally on The Walking Dead, and Rick prayed once, but other than that, religion plays a minuscule role in these worlds if it’s present at all.

Which always struck me as odd, given how central religion has been to human existence. Where are my apocalyptic stories featuring God? (And I’m not talking about The Road, which is amazing and all about God but where religion still doesn’t feature prominently in the story).

Enter Pure by Julianna Baggott, hailed by many as “the next Hunger Games”.

Pure introduces us to a world crushed by nuclear holocaust. But these bombs contained a malicious genetic element – those exposed to the blast were immediately fused to whatever they were doing at the time. Only those inside the Dome, a massive, well dome were protected. Shortly after the Detonations, as the day of the bombs became known, massive airships from the Dome dropped thousands of papers down to the survivors with a promise:

The message from the Dome included the Irish Cross.
Note the promise of a glorious End the message promises.

But this is all ancient history. The book opens nearly a decade later, on two teens. Pressia lives among the Fused, outside the Dome. She has a doll’s head (complete with the creepy opening-and-closing eyes) fused to her hand. And her friend and conspiracy-theory-nut Bradwell has several birds fused into his back. Still alive.

Partridge, meanwhile, lives inside the Dome. He’s the son of Willux, the man who built the Dome, the apparent savior of humanity. Partridge and his friends are Pures, those who escaped the Detonations.

While Pure isn’t about religion, religion is integral to its world. 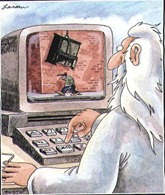 Classic Far Side:
“God at his computer”

We quickly learn that before the detonations, a fundamentalist, right-wing Christian group called the Return of Civility took over much of the country. Their military arm, the Righteous Red Wave, seems to have been responsible for the Detonations.

In the book’s present, those in the Dome are convinced they are there because they are God’s chosen, righteous people. Those outside the Dome are sinners, punished for their choices. Many outside the Dome worship the Pures, trusting in their Eschatological message that they will return to the world one day to save everyone.

All these religious overtones make Pure more compelling because it feels real. The world of Pure feels like a place we recognize.

Pure contains a sharp criticism of Fundamentalist pictures of God.

Is God like the Pures, who stay in Heaven the Dome, away from the sinfulness disease of the sinners Fused?

This picture of God certainly resonates with some kinds of Christianity. Those who believe the world is only Evil, that we must keep ourselves separated. Christians should have our own schools, make our own music and movies, write our own books. Because the world is dirty and sinful and holiness means staying away from all of that.

But God does not stay away from Sin. Jesus reveals a God who steps into the middle of our messes.

Jesus is God incarnate, God who did not stay away from us sinners. God stepped into the middle of the broken creation. So too, we who follow Jesus are not called away from the world. We’re called to embrace the world. Not to separate ourselves into our own little Domes and watch from afar (benevolently or not).

That’s a better religion than Fundamentalism.

The God we meet in Jesus is a God who embraces, not a God who excludes.

Pure works because all that religious stuff is in there, but the books’ not about that. Pure is a story about humanity, so we get not only religious themes, but also questions about identity, community, love and family. The characters are great, the plot is great. Plus, the horror of the various fusings is a unique and creepy element. All of that wrapped up in a plot that twists and turns, surprises, and leaves us hungry for more.

Bottom Line: Pure is a great book that’s well-worth your time. You won’t be disappointed, except that the final book isn’t out yet.

YOUR TURN: Have you read Pure? What did you think of the religious overtones?