A Death in Reflection

The final installment of my reflections on the life and death of John Barnes, my grandfather. 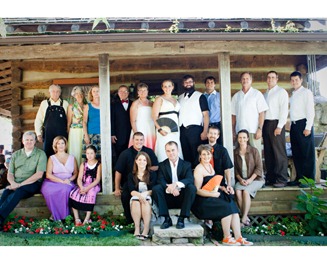 I had driven down that road dozens of times.  And I had parked in that driveway just as often.  Every step I took towards the door was intimately familiar.  As was the doorknob I gripped and the entry way.  It wasn’t until I turned the corner into the living room that I noted the first difference.

A hospice bed.  Where the couch had always been.

And on the bed a wizened, crumpled form, barely larger than a child, and wrapped in a white sheet.  It took me several moments to realize that form was my grandfather John.

Amanda and I had flown into Kansas City to spend a few of John’s last days with him.  His kidneys were shutting down as a result of his lung cancer, which in turn had resulted from smoking for three quarters of a century.

John’s long and full life was almost over.

And I couldn’t help but observe how undignified death is.  I’d experienced death before, but this was the first time I’d ever watched someone in the process of dying.

For the next two days, we sat with John as he wasted away.  We fed him bits of toast and pieces of peaches.  He slept often and while he was awake he was barely coherent.  He didn’t know where he was, occasionally didn’t recognize us.  And he was scared and sick and all of this made him mean.  Undignified.  But as I sat with him, I saw two pictures of grace, beauty that even then grew out of the indignity of death.

These two moments will remain with me forever:

John had pulled himself up to sit on his bed and was complaining that he was tired and wanted to go home (he was home).  And my grandmother, Helen, went to him.

She sat down beside him.

And she spoke softly to him.  Whispered into his ear.  And scratched his back.

She held him and sat with him and even as he lashed out at her she stayed beside him.

God is faithful to us even when we lash out against him.

In another moment, Helen and Amanda had left, and I was alone with John.  He woke up, and in one of his more lucid moments looked at me and scoffed, “You and your tattoos.” (John was never a big fan of my ink.)

I laughed and we had a brief conversation about God.  My mom had told me that in the last year or so of his life, John had begun to doubt his picture of the afterlife.  I and his pastor had both had conversations with him, and one of those conversations must have come back to his mind in that moment, because he looked at me and spat out, “You don’t have any more idea than I do what happens next.”

I have discussed in two of my previous posts John’s faith, which he expressed primarily through his embodied life as a part of the Mound City, KS community.  John was an active part of his faith communities throughout his life, and his faith was lived out through his physical presence in the world – his generosity and service – much more so than through his thought and contemplation.

I sat by John as he lay dying and questioning and I wondered if a short season of doubt at the end of a long, full life can invalidate a lifetime of service and giving, of embodying the Gospel.

And I thought of the man who came to Jesus, asking for his daughter to be healed.  Jesus told him that all things were possible to them who believed and the man cried out,

“I believe!  Help my unbelief!”

Jesus told the man – doubts and all – that his daughter had been healed.  And the guy had to leave, travel a day and a half back to his home, not knowing anything about his daughter’s health.

His actions proved his faith, even when his thoughts couldn’t.

I held John’s hand as he slid back into the stupor of the dying.  And as he slept, I reflected on these things.

God is faithful to us.  And I truly believe that our actions speak at least as loudly as our words.  And hopefully, sometimes, even louder.

John was dead less than two weeks later, his body finally giving up in its long struggle against death.  And I mourned then, and mourn still, but it is a sorrow laced with hope.

I believe that, because Jesus’ resurrection is an embodied reality, I haven’t seen the last of John.

25 Reasons I Love My WifeBlog, Pop Culture
Speaking of… Conversations on the RoadBlog, Influence