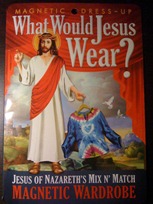 A couple of good friends of mine picked up this magnetic dress-up Jesus. I can’t tell you how fortunate I feel that when my friends see this, they think of me and buy this for me.  I am going to use dress-up Jesus over the next several weeks to explore the various types of Jesus we settle for rather than the real Jesus we meet in the Scriptures.

A disclaimer: these images of Jesus are supposed to be funny, so before you get up in arms about them, sit back, count to ten and think about what I’m saying.  Just for a minute or two.  Then go ahead and get mad and burn me in the comments section 🙂

Without any further ado, may I present today’s subject of interest, especially appropriate given that yesterday was July 4. 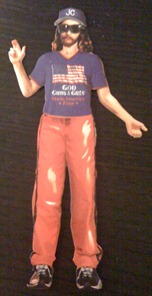 Doesn’t He look ready for some BBQ and Apple Pie?  Maybe a baseball game a little later and then some fireworks?  His shirt, in case you can’t read it, says “God, Guns and Guts Made America Free.”  This is all too often the way we think about Jesus’ relationship to those of us who follow Him here in America.  Jesus died for our sins – was sacrificed for them.  The word ‘sacrifice’ is a religious term – it means to make something sacred or special by giving it to a deity.  Sacrifice is a powerful word, with powerful connections.

So it’s not especially surprising that we try to co-opt the word, to apply it to so many other scenarios, including when a soldier gives up his or her life.  In fact, many within the Church commemorate the service and death of soldiers by proclaiming them to be ‘sacrifices’ (consider this book from a Christian publishing house).

But is this a sacrifice?  The soldier is giving up his or her life for the defense of American interests.  Are these interests always Jesus’ interests?  Uncritically, we immediately answer, Yes, of course!  God is always on our side, after all.

But if we stop to think for a moment, we can recognize that America has not always been on God’s side – we recognize that the genocide of Native American peoples was a great evil, as was the institution of slavery.  And yet both of those movements were resolutely defended by persons who claimed to follow Jesus.

So how can we be so sure today that Jesus is on our side?

Such a question should at minimum cause us to pause and consider.  Here’s what Rob Bell had to say about the matter:

On the news are sound bites form a speech by the president of the United States.  He’s on the deck of an aircraft carrier, proclaiming victory in a recent military effort.  Not only was the mission accomplished, according to the leader of the world’s only superpower, but American forces are now occupying this Middle Eastern country until peace can be fully realized within its borders.  This puts a Christian in an awkward place.  Because Jesus was a Middle Eastern man who lived in an occupied country and was killed by the superpower of his day. – from Jesus Wants to Save Christians, p 17.

Is Jesus on our side?  That’s probably the wrong question to ask.

It certainly was for Joshua when he encountered the Angel of the Lord in Joshua 5:13-14.  Even though Israel was God’s chosen nation, God did not side with Israel.  Joshua should’ve been asking how he could be sure he was on God’s side, not vice versa.

And there, I think, is the fallacy of the American Jesus.  We assume that Jesus is just like us, and so Jesus can’t challenge us.  And we end up sacrificing to America, our jobs, our families, or any number of other false gods we fashion for ourselves.

And we forget the words the author of Hebrews spoke to us:

Every priest stands day after day at his service, offering again and again the same sacrifices that can never take away sins.  But when Christ had offered for all time a single sacrifice for sins, “he sat down at the right hand of God,” and since then has been waiting “until his enemies would be made a footstool for his feet.” – Hebrews 10:11-13

The only sacrifice we have left to make is of ourselves to God.

Not to America or anything or anyone else.  Jesus did that for us.  He won the victory, and the day is coming soon when every knee will bow and every tongue confess that He is Lord. (This doesn’t mean we can’t talk about soldiers as brave, courageous or honorable; I have several friends who are stationed in the Middle East right now and they are certainly these and more.  I only want to caution us against the misuse of religious language both in the military and in our own lives.)

So the question is: Are you on God’s side?

BONUS: Here’s a preview of what’s to come 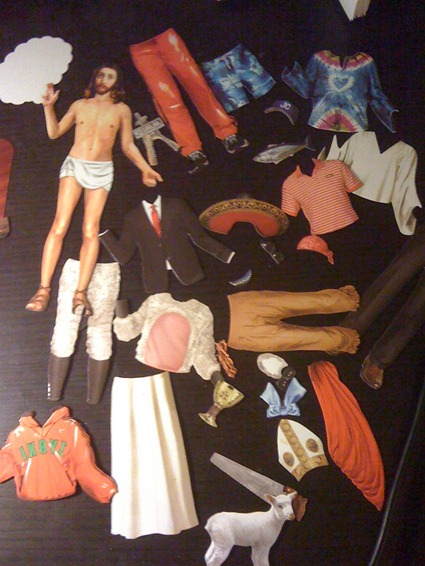