Jesus Rose from the Dead, Ascended to Heaven and is Seated at the Right Hand of the Father

Jesus Rose from the Dead on the Third Day

Too often, religion is about a new program - seven steps to a deeper faith or four tips to transform your marriage. But the reason Jesus came to earth was because we can't improve ourselves. We're lost under the power of sin. The good news is that his resurrection offers us something better than self-improvement. We have been given the transforming power of the Holy Spirit. How can we learn to wait and notice where the Spirit is at work in our daily lives?

This sermon is written and delivered by Sue Sweeney.

One year, when I was teaching 9th grade World Geography, I had a student named Michael. Michael wasn’t really into school, to say the least. By the time he first crossed the threshold of my classroom, it was already his second attempt at World Geography. All of his older brothers who had come through our school had already dropped out before the end of their senior year. Michael seemed determined to follow in his brother’s footsteps. He showed up in class barely often enough to keep himself out of truancy court. When he did show up to class. He sat languidly in his desk, his long arms and legs hanging out to the sides and he refused to do any work. When I protested, he pretended to work for a while and then would lay his head on his desk and fall asleep.

I told him sternly that I would not tolerate this behavior. I reviewed the rules. I went over the regulations and explained the consequences. There would be phone calls home, detentions, referrals to the principal’s office, etc. All this potentially resulting in failing World Geography a second time.

He had no intention of attending any detentions, he already spent plenty of time in the principal’s office, and he failed classes before and was still around so none of these threats were the least bit meaningful to him.

So, I changed tactics and tried to be encouraging. I tried to explain to him why he was missing out on a great opportunity by not doing any work in my class. He would always look at me blankly while I spoke and when I finished, he would return to napping at his desk.

Eventually, I gave up. As long as I left him alone, he was happy to keep to himself and snooze the class period away. Since he wasn’t really bothering anyone, I just let him sleep. A couple months later, he was sent to alternative school for selling drugs out of his backpack in the hallway. After a few months away, he returned to school and got in trouble again and we didn’t see him at our school anymore after that.

Unfortunately, Michael is not an unusual case. I’ve had a lot of students like him over the years.

Anyone who has taught in one of our secondary schools in the area has had at least a few or more “Michaels” in their classrooms every year. We have thousands and thousands of Michael’s in in our DFW schools, struggling and failing. The problem of chronically failing students is a problem so pervasive and difficult that often teachers and administrators feel powerless in solving it. Educators blame the community for a lack of involvement and adequate funding. The community blames educators for lack of competence and misuse of funds. Everyone blames testing although knowing at the same time that you must inspect what you expect and you can’t hold people to high standards if you’re never going to bother to measure their progress. For the leadership of a school district, attacks are always coming in from all sides. As a result, millions of dollars and work hours have gone toward public and private policies, programs, and initiatives which promise to improve the academic achievement of struggling students. For teachers, it seems like barely a school year passes before their district invests tons of money into another “magic bullet” solution that seems to make things worse instead of better. In education, we call this “initiative fatigue” which describes the exhaustion teachers feel year after year as they experience a seemingly endless onslaught of programs that over-promise and under-deliver.

You may not be an educator, but maybe in your work world you deal with people who are constantly pushing programs which promise to solve everyone’s problems- a magic bullet solution. Maybe personally, you’ve tried out a program which promised to make you smarter, better-looking, more efficient or more popular. Only to abandon it when the results were not has satisfactory as you had hoped.

Religion is like this too. It’s all about improvement.

You walk into any Christian book store and you can find a whole section of religious self-improvement. How to pray better, how to be a better friend, spouse, or parent. As if we’re all just one 17-step program away from being the most perfect version of ourselves. But it’s a game we just can’t win. We get bogged down in step 12 of 17 and then we give up move on to something else.

The Good News is that we are not on our own. We don’t have to rely on an “initiative” or a “program” to see transformation in our lives.

The Resurrection of Jesus gives us the Holy Spirit to help us become the people we were meant to be.

Join us Sunday as we learn how the power of the Spirit transforms our daily lives. 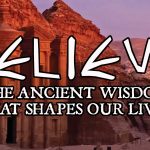 Jesus Will Return to Judge the Living and the DeadSermons, Teachings