Naked celebrities are one thing, but what happens when PETA mis-appropriates religious symbols?

In my last post, I began to discuss PETA’s controversial ad campaign featuring nude celebrities.  I argued that PETA’s ads intentionally dehumanize the models in order to relegate humanity to the same moral plane as animals… in short, that one of PETA’s strong messages is that humans are just another animal (and therefore morally equivalent).

What is the “Angels to Animals” Campaign?

Even more disturbing to me, however, is another arm of their campaign that calls us to be angels to animals.  Again, consider these two (relatively) innocuous ads featuring actress Famke Janssen and The Hills star Audrina Patridge.  In comparison to most of the other ads, these two are tame: the models are wearing more clothes than most, and the only thing that makes them look especially cherubic is the large pair of wings on their backs (I’m pretty sure Ms. Janssen’s are photo-shopped, and bonus they’re black – maybe a shout-out to Dark Phoenix?)

But the Angels campaign didn’t stop there.  PETA tapped Supermodel Joanna Krupa, a self-professed Catholic who had already done a series of PETA ads (for their “I’d rather go naked than wear fur” campaign).  Her first ad is interesting enough – a heavily air-brushed Krupa – topless, clutching a small dog to her chest and looking at the camera – sports angel wings, a halo and a rosary dangling from her hand.  You would’ve expected this ad to generate a fair amount of controversy, but PETA also released this steamy Krupa ad, which features the model hovering inside a church building, over a gathering of dogs, and completely naked (save for the wings and halo).  She’s holding an iron cross to her body, and it just barely covers the legal minimum.

The uproar over this ad was immediate and loud, and Krupa was quick to defend herself, calling her ad “beautifully done and classy” (and quickly adding “I don’t think there’s anything sexier than a man who loves animals.”).  In another interview, according to the NY Daily News, she said: 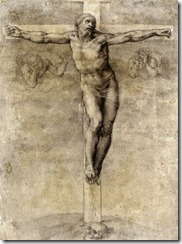 Representatives of the Church called the ad “irresponsible” and PETA a “fraud”.  Krupa says it’s “beautifully done and classy”.  So which is it?

So is it a big deal or not?

As a Christian, I take offense to this campaign because – just like other arms of this campaign – it reduces humans to the level of animals (or, perhaps more appropriately in this case, elevates animals to the level of humanity).  Assuming the same reductionist modernism the other ads are espousing, these ads first deny that humans have a spiritual aspect.  Because we do not have access to any sort of transcendent religious reality, these ads are free to reinterpret ‘spiritual’ to mean whatever they want, using whatever religious symbols they choose.  Whether intentionally or not (and I think PETA’s way too smart to do anything unintentionally), these ads appropriate cherished Christian symbols and subvert their meaning, thereby communicating a message that is consistent not with the Gospel, but with a modernist worldview. Consider the rosary in Krupa’s first ad.  Krupa is shown holding a dog to her chest while a rosary dangles in front of her.  According to Pope Benedict XVI, “The  traditional image of the Madonna of the Rosary depicts Mary holding the child Jesus in her arm and giving the rosary to St. Dominic. This significant iconography shows that the rosary is a means given by the Virgin for contemplating Jesus and, meditating on his life, for loving and following him always more faithfully.”

It’s not hard to imagine that, in Krupa’s ad, we’ve become St. Dominic and are being invited by a sexy and sexual holy mother to act as the savior (remember back in the 1980s when the new Madonna made virginity sexy, rather than admirable?) for animals that are in pounds (the text of the ad reads “Save a life by adopting from an animal shelter…” emphasis added).  But what, exactly, in Krupa’s image are we being invited to contemplate?  Not Jesus’ death and resurrection, which rescued us from death.  And not his life, which modeled for us how to live in the light of that rescue.

The ad invites us to consider how we might become saviors ourselves by rescue animals from certain death – a divine act in PETA’s eyes, and certainly one any Christian seriously concerned with creation care should consider.

But should we consider this the heart of the Gospel?  Should we meditate on animal rescue as the whole of Jesus’ life?  Certainly not.

And in the other ad, Krupa holds forth a crucifix while hovering over her congregation of canines.  Her nudity, the halo and centrality of the crucifix can’t but call to mind 2,000 years worth of Jesus-paintings.  More explicitly than the last ad, this one encourages us to think of ourselves as saviors for Fido and Rover.  Are Christians called to imitate Christ?  Yes.  Are our meditations on the Cross meant to move us to act, to imitate Jesus?  Yes.  But the Cross is not fundamentally about imitation.  It’s about participation in Jesus’ divine death.  We are not meant to look on the Cross and ponder how we might become saviors ourselves; rather we are reminded of our need for a savior, and how his rescue of us has made us participants in his kingdom.  But that’s not what’s happening in this ad.  PETA has taken the central Christian symbol and undercut its meaning.  The Cross is no longer God’s rescue of humanity from the consequences of our own sinful choices.

In PETA’s ads, it’s a (sexy, airbrushed) invitation to become a savior in your own right, not through pain and sacrifice, but through the beauty of caring adoption.  We’re being invited into the divine life not because of what God did for us, but because of what we can do for animals.

Again, I want to give kudos to PETA for their clever advertising campaign, and for the fact that they take the stewardship of creation way more seriously than most Christians do.  But this is not the way to get my support.  I think that – as a Christian – we can use religious symbols more effective and respectfully.

I was going to talk about Maggie Q’s rendition of Eve in the creation-language-laden “Turn over a new leaf” ads, but this post is already long enough.  It’ll have to wait till next week.

For now, what do you think?  Am I reading too much into these ads?  Is PETA intentionally appropriating Christian religious symbolism?  Does it matter?  What should our response be?