I wrote a couple of days ago about the bout of xenophobia I’d experienced when I first got to Cairo, about how disconcerting it was first for the experience itself, but then doubly for the shame I felt that someone so… enlightened… as myself would have such a visceral reaction to a strange culture.  (And for the record, I now feel a third layer of shame in confessing how I see myself to you, but I want to be honest here.  Thank you in advance for your grace and forgiveness at my arrogance.) 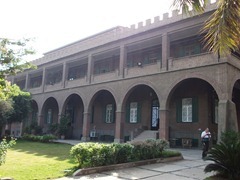 Our last day in Cairo is Monday, November 8 (which is when I’m writing, though you won’t have the chance to read this until at least the end of the week).  Because the last five days have been so hectic and crazy, and because Cairo is such a stressful place to be out and about, all three of us have decided to stay in the Institute today to relax and enjoy the peaceful surroundings.

I have to reiterate how much I’m enjoying Dominican hospitality.  The fathers here are hilarious and kind – last night they prayed over supper in English and we discussed everything from politics (American and French) to climate change to international travel, all in the midst of much laughter.  Saturday night, we got to participate in their week-ending ritual: watching an American blockbuster.  This week’s selection: The Expendables.  As Jean – a Dominican nearly my own age who knows French, German, English, Japanese and Arabic – explained, “After a long week, you just want to turn your brain off and watch something.”

This morning, I slept in as well as possible given the Cairo traffic and then grabbed one of the books I’m currently reading – Untamed Hospitality: Welcoming God and Other Strangers – and headed to the garden, taking a Pepsi in a glass bottle with me. 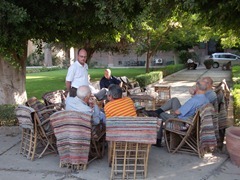 The Switchfoot in my headphones was only occasionally interrupted by horns or sledgehammers from the nearby construction site.  I relaxed under the trees, feeling the breeze and the sun, reading or watching the feral cats run all over the grounds, and I felt profoundly at peace.

After three days of craziness in Cairo, I was struck by the totally different feeling of the Institute.  I’m sure it has much to do with the fact that the Institute is run by Westerners, but I the more I reflect, the more I’m sure this is a microcosm of the Church as a whole.

We are to be an island in the midst of the world – a place of safety and refreshment.  A place of hospitality where everyone feels welcomed into the mysterious inner life of the Holy Trinity.  The Dominican brothers are family to each other, and I am challenged and encouraged by their example.  I want to imitate them.  I want this kind of a community, one that is intimately bound together in their worship of God.  One that is different in almost every way imaginable from the culture around it, yet is still profoundly engaged in that culture.

A note to leave you with: the Dominican who founded this Institute was considered the foremost expert on the Koran in Egypt. Muslim scholars who disagreed would seek him out to settle their debates.  Think on this.

As worship experiences go, my day in the garden was a good one.  I only wish I’d been able to share it with you.

We arrived in Cairo late on the evening on Thursday (November 4).  Getting through Customs and entering the city took quite a bit longer than I had expected (plus it cost $15 just to get into Egypt!), but we finally hailed a cab at about 11:30 pm local time, and headed to the French Institute of Oriental Studies (apparently, ever Dominican institution founded in the Middle East is French). 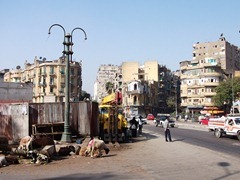 Our cab driver was the second-most aggressive driver in Egypt, which puts him high in the rankings world-wide (I say second-most aggressive because another driver nearly killed us and didn’t bat an eye).  I’ve been on the road in three Central American countries and they don’t hold a candle to the streets of Cairo.  Most streets don’t have any markings on them at all, which means that there are as many lanes as any individual driver chooses.  Even where the streets are marked, drivers treat the marks as kind suggestions at best (which can be frightening given that the marked streets tend to be bigger, more-used thoroughfares).  That lovely road that looks to be a 6-lane highway?  In practice, I’d bet on closer to 10-12, depending on the nanosecond you choose to count. 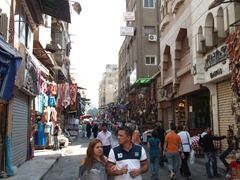 Maybe it’s just because we arrived on what is essentially Friday night in the Muslim world (Friday is the Muslim Holy Day), but Cairo even at midnight was alive and bursting with energy.  From my window, I can hear horns bleating all hours of the day and night.  The biggest difference I’ve noticed is how dirty Cairo is.  The filth is party due to the fact that, as Father Kevin put it, we’re on the edge of a sandbox as big as the United States.  Everything is covered in a thin layer of sand.  But beyond the sand, the city is just polluted.  You can smell it all the time, see it on every street.

We were greeted at the Institute by a Dominican brother who welcomed us with bread and cheese, then quickly settled into our rooms and headed out the next morning to the al-Hussein Oriental Bazaar, one of the largest bazaars in the world (a bazaar is a lot like a market).  All the prices here are negotiable, which always takes me a while to get into when I travel.  Merchants yell at us as we pass, offering (and more often demanding that we purchase) every sort of good imaginable.  The merchants are shockingly pushy – if you’re not very firm, you’ll get pulled into their shop and they’ll practically take money out of your wallet.  They’re incredible salespersons (in fact, according to the Lonely Planet guidebook, the merchants who work this bazaar are better than anyone else in the world) and negotiating with them is frustrating at first, but can be quite fun.  I managed not to get ripped off too badly by the end of the day. 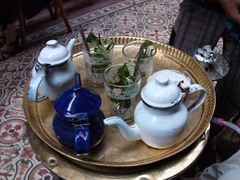 Even more than in Jerusalem, I noticed a strong xenophobic reaction in myself.  Egypt is thoroughly non-Western.  Egyptians don’t seem to have any great love for America (though they’re not especially hateful either).  In the less modern areas of the city, everyone seems to be selling something, and their friendliness so often degraded into a sales pitch that I quickly grew wary of anyone who complimented by beard (“You look like Egyptian man!” while stroking a fake beard) or my tattoos (“Shalom! Where you from?” upon seeing my Star of David, or more frequently simply, “Hey, Mr. Tattoo! Nice tattoos!”).

Beyond that, this was my first time in a truly Muslim culture.  I grew up (and still live) in the Midwest, where we have a church building on every corner.  Where (as a rule) our culture’s greatest, most grandiose architecture was built to the glory of the Holy Trinity.  Where even as church attendance plummets, the effects Christianity has had on our culture are inescapable.

Not so in Cairo.  Though Egypt was once Christian for several hundred years, you’d never know it today.  Egypt was one of the first countries to convert to Islam, and so has been Muslim for about 6 times as long as America has been a nation.  The culture is thoroughly Muslim.  Nearly every woman wears a headscarf (if not a full burka).  Many men wear the traditional long Muslim robe.  There’s narry a BLT to be found (and I’m pleased to report that the KFC Double-Down sandwich is not served in Cairo’s KFCs).  In our cab rides all over the city, we’ve seen one dilapidated building bearing a cross. 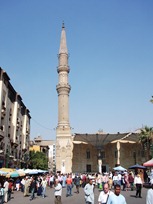 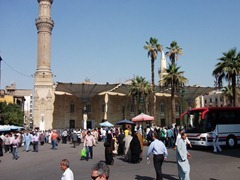 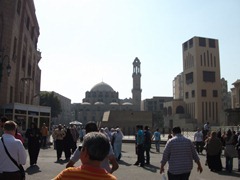 I’ve felt very out of place here.  And much to my shame, I’ve felt afraid, suspicious when I’ve been out in the City proper.  I say that’s to my shame because no one here has treated me as anything worse than an ignorant American tourist (which is to say, the shop owners try to cheat me out of money).  And that’s the exception rather than the rule.  Most people have been very kind and helpful.  Very friendly.

Once I overcame my initial shock at being in such a different place, I began to notice similarities.  In the shop windows of women’s boutiques, mannequins sporting designer headscarves stand next to others displaying fashions that would draw attention at any American night club.  At the Pyramids and the Egyptian Museum (more on these visits tomorrow!), Muslim school children ignore their teachers and laugh with their friends as they run from point to point.  As we were heading to get some lunch, a young Muslim woman came up beside me and started examining my tattoos.  She laughed and smiled at me, flashed me a thumbs-up and then pantomimed lifting weights before heading off in a different direction, waving and calling out a goodbye as she went.

My time in Cairo has helped me to see that, despite the (very) foreign exterior, beneath all the strange customs and incomprehensible Arabic, the Egyptians are shockingly familiar.  Beneath the sand and dirt, Cairo’s smog isn’t all that different from LA’s.  The mosques aren’t gathering terrorists.  These people are just like you and me.  They’re just as ethnocentric and patriotic.  Just as passionate (or indifferent) about their beliefs.  They love and fear and want and need just like us.  Of course, recognizing our common humanity doesn’t solve any problems, but it at least gives us a good place to start talking. 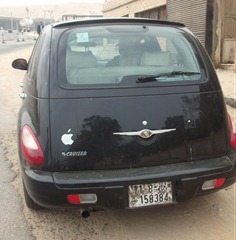 As soon as I learn Arabic…