Spoiler alerts! If you haven’t seen True Grit, you may want to shy away from this review, as it’s got quite a few spoilers (major and minor) in it. You have been warned… 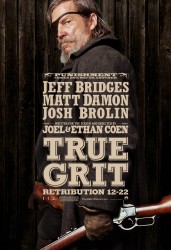 True Grit is the latest offering from the Cohen brothers (The Hudsucker Proxy, Fargo, O Brother Where Art Thou, No Country for Old Men), and it’s an adaptation of the same Charles Portis book as the 1969 film for which John Wayne won his Oscar. The film is a profound meditation on what vengeance, redemption and justice look like in a world without God.

True Grit opens on a dead body lying in the snow, while the old gospel song “Leaning on the Everlasting Arms” plays in the background. A 40-year old Mattie Ross tells us that the body is her father, and that when she was 14 years old, he was murdered by the outlaw Tom Chaney (Josh Brolin). This, then, is the story of how Mattie (played at 14 by Hailee Steinfeld) avenges her father’s death. Mattie – who is quickly revealed to posses a bravery and self-assurance rare at any age – justifies her quest to her audience by claiming that

There’s consequences for everything we do in this world, one way an’ another.
Nothing’s free but the grace of God.

Mattie sees herself as God’s instrument of justice – justice in this case being Tom Chaney’s death. This conviction steels Mattie against the adult world she encounters: her bravery may in fact be the ignorance of the innocent. Mattie is convinced she lives in a world of black and white, where right is right and wrong is wrong, and where no one can escape the consequences of their actions. She pursues the outlaw Tom Chaney with the conviction of the righteous, telling her mother not to worry because

“Though I walk through the valley of the shadow of death,
the creator of all things watches over me.”

Mattie knows that Chaney must die in order for her world to be right, and she is also well aware that human law may fail her. Thus she is willing become that instrument of divine judgment, delivering to Chaney the right and proper punishment not according to the laws of humanity, but the laws of God. When asked what she plans to do with her father’s gun, she states plainly,

I aim to kill Tom Chaney. If the Law fails to do so.

This is a child, an innocent, in an adult world. As she prepares to follow Chaney, Mattie dresses in her father’s clothes, tailoring them so that they’ll fit her well enough. Throughout the rest of the film, they serve as a reminder that she is a dove among serpents, a sheep among wolves.

Chaney has fled into the Indian Nations, so the local law will not pursue him; Mattie seeks out Reuben “Rooster” Cogburn (the Duke’s role, now played masterfully by Jeff Bridges), the meanest U.S. Marshal around, to apprehend Chaney with her. Rooster is a drunk Civil War veteran who’s missing an eye and prefers killing men rather than trying to bring them in alive. But even Cogburn bends to the righteous will of little Mattie Ross. Mattie and Cogburn move steadily into the wild of Indian Territory and closer to the inexorable confrontation with Chaney (accompanied sporadically by Matt Damon’s Texas Ranger LaBoeuf – pronounced ‘La Beef’).

“Tom Chaney, stand up,” and fires, killing him.

The force of Mattie’s shot, the very action of vengeance-taking, knocks her back into a deep cavern. She’s caught by a root, hanging upside down, struggling to get free. She reaches for a dead body on a ledge near her, wanting its holstered knife to cut herself free. But as she drags the body towards her, the ancient clothes tear away, revealing a brood of rattlesnakes hibernating in the corpse’s chest cavity. One of the snakes bites her hand, sentencing her to Death.

Finally the visual and thematic elements of the film congeal into some version of the Christian story. Mattie kills, and that action destroys her innocence. That sin casts her into a pit from which she cannot escape – in fact, every action only brings her closer to death until a snake bites her. Mattie’s Messiah comes in the form of Cogburn, who rappels down into the cave, sucks the poison out of Mattie’s hand and races her to a doctor.

At the beginning of the film, Mattie claimed that,

There’s consequences for everything we do in this world,
one way an’ another. Nothing’s free but the grace of God. 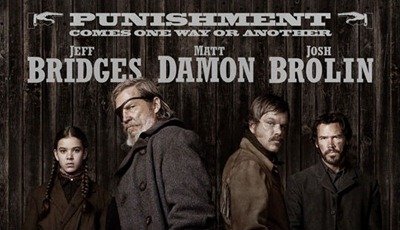 Certainly this is true for the characters that inhabit True Grit, and the consequences are born on their bodies. Rooster Cogburn is clearly a grey character, and is missing an eye. LaBoeuf nearly bites off his tongue and speaks with an impediment for the rest of the film. Chaney has a black blemish under his eye – his defining mark in the film. A dentist buys a dead body, removes the teeth and offers to sell the body to Mattie and Cogburn. An outlaw has his fingers cut off by another outlaw just before Cogburn shoots him in the face, prefiguring Chaney’s blemish. As the film closes, we see that Mattie Ross has borne the consequences of her vengeance as well – the snakebite cost her her left arm.

Mattie is no longer a dove; she has become a wolf.

Imperfect vengeance and incomplete salvation seem to be the best characters in the world of True Grit can hope for. While Mattie gives lip-service to God’s grace, it’s nowhere to be found in this movie. Justice only comes to those who are strong enough to take it. And the best savior they can hope for is half-blind and drunk. All-in-all, it’s a far cry from the promise in the film’s theme-song.

“Leaning on the Everlasting Arms”

Bottom Line: The film is typical Cohen Brother brilliance. Everything is spot-on, from the actors to the sets and costumes to the score. A+, all around. Go see it. And please let me know what you think.