You and Me, Baby, ain’t Nothing but Mammals

Call me slow on the uptake, but I recently came across a series of PETA ad campaigns that began back in 2007 featuring celebrities posing nude to promote various PETA causes – adopting animals, vegetarianism, not buying furs or testing products on animals, etc.  The ads are provocative, and I immediately saw why PETA is using them.  They’re guaranteed to stick in your mind, and they make their point cleverly.  And while I have a huge problem with sex being sold in advertisements in general, I found these ads particularly troublesome (in the interest of not offending potential blog readers, I am not posting any of the pictures; I will link to each image I discuss, and you are free to click at your own discretion).

I didn’t find the ads offensive because of the partial-nudity.  I recognize that the human body has long been a subject of artistic exploration, and I’d like to think that I have grown up enough that the sight of a mostly-naked woman doesn’t automatically send me running for the hand lotion.  I do, for the record, find pornography to be dangerous, offensive and inexcusable, but I don’t think that all nudity is pornography.  In this upcoming series of posts, I’ll be taking issue with the ads for several reasons.  First up, in these ads:

Some of the online discussion has suggested that the ads are not sexual in nature, that they only celebrate the beauty of the human body, and in some of the ads, like Alicia Silverstone’s, I would be willing to concede the point: taken by itself, her ad isn’t explicitly sexual.

The overall tone of the campaign, however, is most certainly sexual.  Consider these ads featuring adult film star Sasha Grey and Playboy Bunny Holly Madison.  Both ads not only feature women (in)famous for their sexuality, but are themselves sexually explicit – Grey looks invitingly from a bed while the text exclaims that too much sex can be a bad thing (so we should spay and neuter our pets), while Madison tells us that she “always fakes it!” while letting a (faux)fur wrap drop away from her body.

I’m not especially surprised that these women would pose in such ads – both are featured in more-explicitly pornographic material and have made their sexual adventures their occupations.  And I don’t believe that PETA is just exploiting their willingness to bear it all to bring sexy back to animal rights.

Rather, PETA is exploiting the the dehumanizing nature of pornography to place animals and humanity on the same ethical and moral plane in the minds of those who view the ads.

PETA wants us to think that humans are just another animal, and they’re using our sexuality to prove their point.

Don’t believe me?  Check out this ad featuring British TV personality Jodie Marsh.  Here, Marsh is shown with her back to us, covered in lines demarcating the choice cuts of meat – round, rump, loin, chuck, etc. – as though she were a cow or pig.  The ad reads “All Animals have the same parts”.

So why is this a problem? 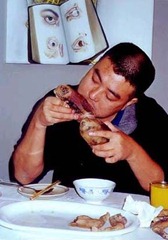 PETA’s ads are sending a clear message: our sexuality demonstrates that humans are just another animal, and that fact morally obligates us to extend to them the same moral and ethical boundaries we have for one another.  If humans are ‘just another animal’, then you should no more eat meat or wear fur than you would eat human meat or wear a coat of skin (shout out to Buffalo Bill in Silence of the Lambs).

This worldview is consistent with a reductionist modernism – a denial that humanity is anything more than material, a denial of our spiritual dimension (which will be important in the next post).  It’s consistent with the crass-but-catchy Bloodhound Gang tune, “The Bad Touch”: “You and me, baby, ain’t nothing but mammals, so let’s do it like they do on the Discovery Channel.”

A worldview shaped by the Scriptures rejects this sort of reduction (no matter how sweet the packaging).  We affirm that humans and animals are both creatures – both created by God – but humanity bears the image of God.  We are indwelled by God’s Spirit.  And part of what it means to be human is to exercise dominion over the Earth – including the animals (Genesis 1:28).  The Scriptures bear witness to a sharp demarcation between humans and animals.  And that means that to reduce humans to the moral level of animals is wrong, and ultimately harmful to a wholesome picture of our humanity.

That doesn’t mean we are free to exploit animals, to use and abuse them as we see fit; in fact, Revelation 11:18 makes it clear that careful stewardship of the Earth is part of what it means to follow Jesus.  But that’s not the same as reducing us to animals.  There’re better options.

I’ll explore those options further in my final post in this series.  But coming up next, we’ll explore the more religious ads in PETA’s campaign.  For now, I want to hear what you think:

What do you think of the ads?  Do you think they’re pornographic (and what does that even mean)?  What connection do you see between our sexuality and our humanity?  And what is a Christian’s obligation (if any) to the Earth and to animals?