My Wife’s (Not So Secret) Superpower 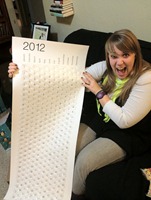 Today is my wife Amanda’s 27th birthday. Over the last couple of years, I’ve posted about many of the things I love about her (here and here). So today I decided to do something different. I’m going to let you in on her secret superpower.

Amanda makes it impossible not to love her.

In the five years I’ve known Amanda, I’ve never known anyone who didn’t like her. Here’s a case-in-point:

Back in February, Amanda and I visited our friends Faith and LaRue in Tucson, AZ. Faith and LaRue are Catholic, and they spend time most weeks volunteering at the Casa Maria Mission, which is run by a Catholic Worker named Brian. 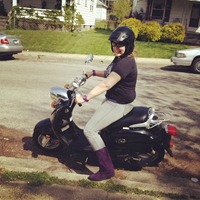 The Catholic Workers are a lay organization within the Catholic Church that works with the poorest of the poor. They live among the poor and are always very politically active. I’ve yet to meet a Catholic Worker who’s not a little bit crazy, but that comes from their passion and dedication to fighting a seemingly invincible system of poverty and injustice.

In any case, LaRue briefed us on Brian before we went to Casa Maria: Brian doesn’t talk to anyone who volunteers for the first time. In fact, Brian doesn’t really talk to volunteers until they’ve been showing up consistently for quite a long time – sometimes as much as a year. 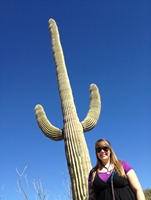 It makes sense to me: here is a man on the frontlines of a war that often seems hopeless. He doesn’t show up once a week. This is his life.

Why would we occasional volunteers expect to receive his attention? Frankly, he’s got better things to do.

We spent the morning making sandwiches for the homeless Casa Maria serves and, true to form, we didn’t even see Brian. No surprises there. 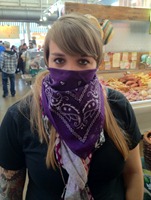 That afternoon, we attended a bilingual Bible study Casa Maria hosts. The group – about 15-20 of us – was mixed. Most of the group was bilingual, but several only spoke Spanish. I’m pretty sure I was the only person there who didn’t know at least some Spanish.

Brian attended, and his main concern was clearly to be sure none of the Spanish-speakers were excluded. Any time someone made a comment in English that went untranslated, Brian demanded we pause and remedy that.

Of course, since Amanda speaks fluent Spanish, she quickly became one of the main interpreters. 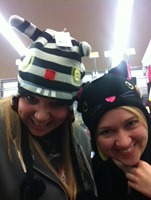 After the Bible study, Brian came up to Amanda and – as LaRue and Faith assure me – in an unprecedented moment, spent a good five minutes in conversation with her. He was leaning in, excited to hear her story and as warm with her as he was with any of the members of Casa Maria.

Amanda’s encounter with Brian confirmed what I’d already suspected: No one is immune to her charms.

The best part, of course, is that Amanda isn’t aware that she’s charming anyone. She doesn’t actively try to convince anyone to like her, but everyone does anyway. She’s one of the kindest, most outgoing persons I’ve ever met.

It goes without saying (but I’m saying it anyway) that I’m proud to be her husband.

I’m not an especially kind person. I tend to be blunt and especially when I’m working on projects, I am more project- than people-oriented.

Amanda reminds me that people always come first. That sometimes people just need to be heard more than they need a problem-solver. (This is why she’s such a good bar tender at the Bridge Café!) 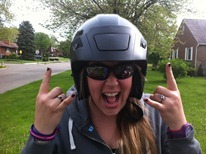 Since Amanda’s not-so-secret superpower is being impossible not to love, I know I’m not the only person who appreciates something about her.

Since it’s her birthday, it’s a great excuse to let her know exactly what you love about her.

Head over to her Facebook page, or leave a comment right down there in the comments section.

YOUR TURN: What’s your favorite thing about Amanda?