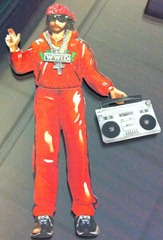 In these next two posts, I again want to explore two Jesuses who are really poles of a spectrum along which we relate to the real Jesus.  So please welcome among us Homeboy Jesus (a.k.a. Jesus H. Christ).

Homeboy Jesus loves you, but he just wants to be your friend.  He’s chill, he’s laid back.  Homeboy Jesus used to think you were rad, back when rad was cool.  But Homeboy Jesus doesn’t say ‘rad’ anymore because, bro, he’s not behind the times – he’s hip!  He’s with it!  He pretty much came up with Urban Dictionary.

Homeboy Jesus loves you just like you are.  You can wear his shirts and jewelry whether or not you live like him.  You can be associated with him just because you want to be.

Because, hey, Homeboy Jesus is your friend.  He wouldn’t do anything to upset you – certainly nothing as extreme as judging you for not living the way he wants you to.  Because Homeboy Jesus is

for anything as wack as that. 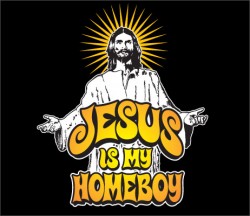 We’ve watered being friends down to yes-man-ship.  Our friends are supposed to think we’re the best thing since sliced bread.  To agree that we are clever and beautiful and hilarious.  And right.  Basically that we’re Jesus 2.0.  Modern friendship certainly contains no element of accountability, not impetus to grow.  No wonder our friendships tend to be shallow (if they have any meaning at all).

This is unfortunate, because a true friendship is meant to better us, to spur us on, to sharpen us (like iron).

We like Homeboy Jesus because following him is easy – it doesn’t require any sacrifice or change on our part.  We can be down with him without ever once being uncomfortable.  If Homeboy Jesus doesn’t like what we’re doing, he’ll just leave, and we’ll be fine with it.

Unfortunately, following this sort of Jesus doesn’t transform us, because we’re really just following ourselves.

Our first clue probably should’ve been how Homeboy Jesus always agrees with us.

We need a better Jesus than this.  And we need better friends than this.  For our own sakes, if nothing else.