Spoiler Alert! If you haven’t seen Black Swan yet, consider yourself warned: there’re lots of spoilery bits ahead in this refraction! 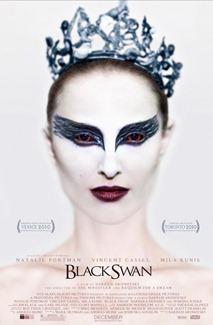 Black Swan is the latest trippy thriller from Darren Aronofsky (The Wrestler, Pi, Requiem for a Dream) and like most of his films, you’re lucky if you know what’s real and what’s not by the end.  What we’re promised in Black Swan is a fairly straightforward offering: young ballerina Nina Sayers (Golden Globe-winning Natalie Portman) wants the lead role in her company’s production of Swan Lake, but her quest to gain – and keep – the role might cost her her sanity, or even her life.  It could easily have been an by-the-numbers sexy-thriller whose only real twist is its setting (that being the gritty, no-holds-barred world of professional ballet).

What we get instead is a profound exploration of the nature of perfection and the complex relationships surrounding innocence and art.

Nina is clearly a child despite her age (which seems to be early-to-mid 20s, though its never stated) – most fully expressed in her relationship with her mother, a failed dancer who had to quit once she became pregnant with Nina, and who has created Nina in her own image.  She meticulously controls every aspect of Nina’s life and the result is that Nina is the best ballerina in her company, technically flawless. Nina’s company is beginning its new season with Swan Lake, in which a princess is turned into a white swan.  She can only be set free from this curse by true love, embodied in the ballet by a prince.  She has an evil twin – played by the same dancer, but in a black costume – who tricks the prince into declaring his love for her instead, so the ballet culminates with the white swan princess committing suicide. 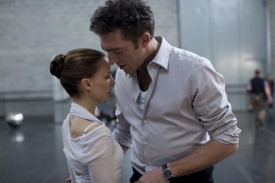 Nina desperately wants the lead, and in her audition, the company’s director tells her, “If I were only casting the White Swan, it would be you.”  Nina’s childlike innocence is her downfall – her director doesn’t find Nina sexual enough to embody the raw seductive temptation he envisions for the Black Swan.  Nina promises she can “dance the Black Swan”, but fears the role will go to new dancer Lily (Mila Kunis), whom Nina comes to view as her rival. Nina begins to explore her sexuality, haltingly trying to discover what it is that she’s missing, what will enable her to become the Black Swan. She becomes less and less stable – suspicions of everybody and unable to process her thoughts and feelings.  A night out with Lily ends in an explosion of lust, releasing Nina’s pent-up frustrations, but who is with Nina? Lily transforms into a black-garbed version of Nina and back several times during the encounter. 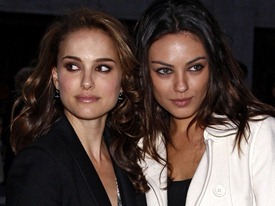 When Nina confronts Lily the next day, she discovers the whole thing was in her head.  Nina’s grasp on reality is as tenuous as her role in the show – further illustrated as we watch her become more and more swan-like, growing feathers, her eyes turning red, etc.  When she discovers that Lily is her understudy, her suspicions boil over.  After a final explosive confrontation with her mother (who has been expressing in no uncertain terms her displeasure with Nina’s transformation) the night of the show, Nina rushes to the ballet to get ready.  She dances the White Swan beautifully, only faltering at the end, when she’s dropped by the prince.  Nina returns to her dressing room to find Lily in Black Swan makeup. Their argument escalates to a fight in which Nina throws Lily into a mirror, shattering it.  Nina then uses a shard from the mirror to stab Lily, killing her. Nina returns to the stage as the Black Swan – now fully transformed – and performs perfectly, to the amazement of everyone in the house.  She returns to her dressing room once more and is congratulated by… none other than Lily, gushing over her performance.  Confused, Nina discovers ‘Lily’s’ body is gone, as though it were never there.  She then pulls a shard of mirror from her own abdomen and we see the truth. Nina’s journey has been Aronofsky’s spin on the story of the human race.  Though we once existed in a sort of perfection, under the rule of a harsh and controlling deity who created us in his image, we traded that shallow, empty and childlike perfection for the fullness of adulthood – embodied for Aronofsky in our sexuality.  Of course Nina’s Fall (in which she even, echoing her mother Eve, blames the prince for dropping her – “It’s not my fault! He dropped me!”) has consequences.  She murders Lily – which actually brings death to her own door.

As far as Aronofsky is concerned, death is a fair price to pay for maturity.  The perfection Nina achieves in her Black Swan far outshines the innocence and grace she embodied at the beginning of the film.

As she leaps to what was supposed to be her figurative death at the end of the ballet, she bleeds out, and her dying words, full of wonder and awe at what she had accomplished, were, “I was perfect!”

Lately, I’ve been wrestling with these same questions.  Most of the best art comes out of suffering and pain.  But if that’s true, then what sort of art will we create in a perfect world, one in which every tear has been wiped away?

Bottom Line: Black Swan is a beautifully done film that’s creepy and mind-bending.  The visuals are astounding and the acting is superb.  And it raises enough questions to merit thoughtful, lively debate afterwards.