Since last week we looked at what the Bible says about the Antichrist, I figured we’d better go ahead and knock out the Mark of the Beast.

What do we think about the Mark of the Beast?

Nearly everyone knows the Mark of the Beast is the number 666. It’s hard to overstate how thoroughly popular culture has embraced the Mark of the Beast as a number of Evil. When I was signing up for a checking account in college, the account number they offered me had a 666 in it. The bankers sheepishly offered to assign me a different account number as they had already had several complaints. 666 is not used as an area code for phone numbers. The number has been adopted by numerous metal bands as a recognizable sigil enhancing their ‘evil’ look. And it’s tough to find a comic book that reaches issue number 666 without sending its title character to Hell or something similar.

The Mark of the Beast is a signal of bad luck, of evil. In our collective imagination, it represents the Devil and his minions, especially the Antichrist. 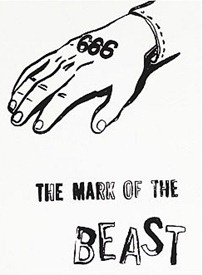 The infamous Mark as the number 666 originated from a short passage in the Revelation to John – 13:16-18:

[The Beast] required everyone– small and great, rich and poor, free and slave– to be given a mark on the right hand or on the forehead. And no one could buy or sell anything without that mark, which was either the name of the beast or the number representing his name. Wisdom is needed here. Let the one with understanding solve the meaning of the number of the beast, for it is the number of a man. His number is 666. (NLT)

So what do we think the Mark of the Beast is?

In popular theology, we most often identify this beast as the Antichrist. John tells us that this Beast has a mark – the number 666. The “Antichrist” forces everyone to bear his mark on their hands of foreheads. Unless people get this mark, they can’t buy or sell anything.

The burning question is, What will the mark look like?

Here, theories abound. Every few years, as new technological breakthroughs are announced, Christians fashion a new theory. I heard often growing up that we’d all be assigned ID numbers and have microchips implanted or barcodes tattooed on our hands or foreheads. We’ve even tried to pass laws ensuring this couldn’t happen. Some fringe Christian groups even claim that worshiping on Sunday is the Mark of the Beast.

So what is the Mark? Is it a barcode? A microchip or number? A day of the week? And what does it mean to receive the Mark? How do we avoid it?

What is the Mark of the Beast according to the Bible?

Some important clues that help us understand: 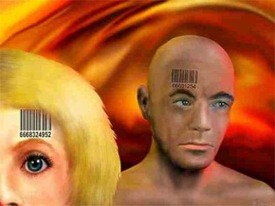 So what do those clues tell us? The Revelation is a book concerned with encouraging Christians who face persecution because they won’t swear allegiance to the Empire. Those who follow Jesus the Lamb were sealed by God on their foreheads in 7:3. This Mark is the Beast’s parody of God’s Mark. God seals God’s people, and the Beast seals his. The forehead symbolized your mind, the right hand your public self, the self that that conducted all business.

The question here is one of allegiance. To whom do you belong? The Lamb? or the Beast? 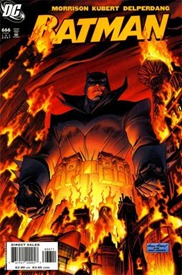 In the visionary world of John’s Revelation, we see those who follow the Empire receiving marks of allegiance to the Emperor, represented by the biggest bogey man ever to lead the biggest Empire the world had ever known. Jesus’ message is clear: do not pledge your allegiance to anyone but God. No matter the cost.

Frankly, to waste our time being afraid of every advance in technology is silly. If we’re serious about avoiding the Mark of the Beast, we have to be serious about where our allegiance lies. It’s not about a number. There’s nothing magical about 666. It’s a symbol John found useful in his culture. We ought to be asking what the Empires in our culture are. And what allegiance to them looks like.

Our allegiance is about much more than microchips and barcodes. We should be asking, Who do my purchases hurt? At what cost do my freedoms come? Where does the Gospel of the Lamb challenge the American Way?

A Visit From the Goon Squad - Book Review