A Visit From the Goon Squad – Book Review 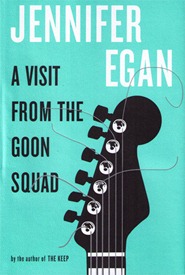 I picked up A Visit from the Goon Squad because it’d been on the bestseller lists for a while. That, and because it sounded like a mob book and it’s been a long time since I’d read The Godfather. Oh, and apparently it won the Pulitzer. The cover promised whimsy and rock-n-roll, so I dived in.

I wasn’t prepared for what I encountered. Even a little bit.

The book opens on Sasha, a thirty-something (I think?) recounting to her psychiatrist the events of a first (and last) date with a guy named Alex. We quickly learn that Sasha likes to steal things, that this is why she’s in therapy. We also learn that until recently, Sasha worked as the assistant of Bennie Salazar, a record producer. She quit because Bennie’s company was in Southern Manhattan, and she couldn’t bear to work near the hole the World Trade Center had left. The chapter ends with Sasha on the counseling couch, silently and contemplative, feeling the minutes ticking away. No mobsters.

Chapter two jumps to Bennie Salazar himself, only Sasha is still working for him. Bennie is recently divorced and takes Sasha and his son Chris with him to check on a band he’s signed but which hasn’t produced anything good for him in a while. We also learn that Bennie is impotent and eating gold flakes to try to regain his virility. Bennie and Sasha wonder together what will become of the empty space at Ground Zero. And that reminiscing leads Bennie to think about his old mentor, Lou, and his old band.

Chapter three jumps back to the days of the old band, and we witness the first meeting between a twenty-something Bennie and Lou. By now it’s clear A Visit from the Goon Squad is not at all what I expected.

Each chapter is different – sometimes first person, others third. Often we get only one person’s point of view. Occasionally we get more. Near the end, Egan introduces us to Sasha’s family through the PowerPoint journal of her daughter, Alison. The whole chapter is a series of slides that give us a glimpse into life with her autistic brother, Lincoln, who is obsessed with pauses in rock music. According to Sasha (according to Alison’s slide), Lincoln likes the pauses because,

The pause makes you think the song will end. And then the song isn’t really over, so you’re relieved. But then the song does actually end, because every song ends, obviously, and THAT. TIME. THE. END. IS. FOR. REAL.”

An ominous echo of the book’s themes. All these encounters we are party to serve as pauses. Reminders that time doesn’t stop for any of us. That life keeps moving. That the end comes for all of us.

It’s easy to see why Egan won the Pulitzer. Goon Squad is skillfully and artfully woven. The characters are compelling if mostly tragic. And as Egan leads us through the book, she paints a picture of a people tragically becoming aware of our own mortality. But where are those mobsters?

In the mouths of several characters who have fallen on hard times, we finally meet the Goon Squad:

This is a book about growing up and growing old. Time marches on for all of us, and we’re powerless against it. Under Egan’s skilled pen, 9/11 is a national coming-of-age, a pause in the music of our lives that reminds us all of our own mortality. The book’s tone is heavily melancholic, but Egan does not leave us hopeless.

Goon Squad’s final chapter is a window ten years into the future, through the eyes of Sasha’s uninspired date, Alex, from chapter one. In a world shaped by technologies just familiar enough to be believable, Egan reminds us that time is not the only force at work in our world.

Many of the characters we’ve met throughout the book come together to hear a burned-out, paranoid, used-to-be musician. A man who bears the marks of time on his body and soul. A man who has transformed his wounds into art, whose pain has become art. 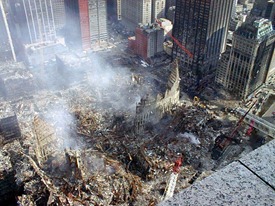 The world of fear, pain and disconnectedness birthed from the pause we all experienced when the Towers crashed down is subsumed in another pause. For a whole people, gathered in the Footprint (which is what the ruins of Ground Zero have become), a concert becomes a pause of redemption. A reminder that we’re not alone, that there’s something bigger than any or all of us out there.

Goon Squad is Egan’s love letter to our culture. She reminds us that time can heal and time can destroy. We all move through our world. And time is kind. And time is cruel. But life always moves forward. Redemption is always right around the corner. Nearly a decade after 9/11, Egan may be the first author to help us come to grips with the changes it wrought on our culture. Especially in the wake of bin Laden’s death, Goon Squad offers us a real chance to heal and move forward.

Bottom Line: a great story with great characters that’ll definitely reward multiple rereads. Do yourself a favor and pick it up. Enjoy the pause Egan offers.

What did you think of Goon Squad? Of Egan’s peek into our collective future? What was your favorite chapter?