Last night, the world learned that the US Military successfully executed Osama bin Laden at a compound in Pakistan. Immediately, the Social Media universe exploded in a flurry of celebratory, nationalistic self-congratulation. Within minutes, #Osama bin Laden was leading Twitter’s trends (narrowly beating out Hermione Granger). If you weren’t paying close attention, you’d think that those of us behind the keyboards were responsible for killing him single-handedly.

I found most disturbing the celebration coming from the Christian camp. Many of us were celebrating his death.

One of the more moderate Facebook comments I read a Facebook read, “Toast that our enemy is dead; sad though that anyone goes to hell.” Too many of us have been raising our glasses and cheering bin Laden’s death. And when we’re asked about it, we’ll begrudgingly admit that we’re sad in the abstract that a human being is now in Hell. But our tone and the tenor of our posts and comments make it clear that if anyone deserves to be in Hell, it’s bin Laden – apparently he’s been placed right next to Hitler.

That attitude makes me very uncomfortable. But how should we respond? What is the appropriate Christian response to bin Laden’s death?

Was bin Laden evil? Yes. Is the world better off without him plotting, scheming and killing? Yes. But is his death something to celebrate? I don’t think so.

Leaving discussions of the nature of God’s judgment and justice to another discussion, we can still ask what God thinks of all this. God sent a warning of impending judgment to Israel through the prophet Ezekiel, asking Israel to repent before they were destroyed. God says,

As I live, I have no pleasure in the death of the wicked. I have pleasure when the wicked turn from their ways and live. Turn back, turn back from your evil ways, for why should you die? (33:11)

Bin Laden was a person God created in God’s image. And yes, he was fallen (as we all are). His place in history made it easier for him to hate. His position, family and wealth enabled him to influence a large number of people to share that hate, and to act on it.

But bin Laden’s story is different from ours in degree, not in kind.

This is what Jesus explains to us in the Sermon on the Mount: 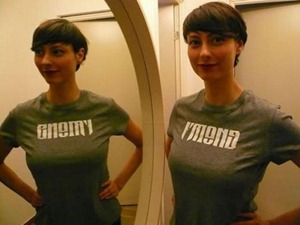 You have heard that it was said, ‘You shall love your neighbor and hate your enemy.’ But I say to you, Love your enemies and pray for those who persecute you, so that you may be children of your Father in heaven; for he makes his sun rise on the evil and on the good, and sends rain on the righteous and on the unrighteous. For if you love those who love you, what reward do you have? Do not even the tax collectors do the same? And if you greet only your brothers and sisters, what more are you doing than others? Do not even the Gentiles do the same? Be perfect, therefore, as your heavenly Father is perfect. (5:43-48)

We are called to be like God. And God does not enjoy the deaths of the wicked. God wants every person on the planet to repent, to quit living lives characterized by hate and fear. Lives that wound and kill. God wants that for you and God wanted that for bin Laden.

Heaven mourns the death of an unrepentant person. If we are subjects of that greatest of kingdoms, if we are citizens of that nation above all nations, then we too, ought not celebrate.

We can feel relief. We can feel gratitude. And we can argue about whether or not justice has been done. What we cannot do is celebrate that any person – no matter how evil – is dead. We must mourn that he did not repent, did not come to know the love of a God who gave up his very life to win him back from his sin.

What do you think? How are you feeling right now? What is a proper Christian response to bin Laden’s life and death?

My best friend Tom posted this quote from N. T. Wright on his blog last month – it’s an especially poignant reminder of what’s at stake in this discussion.

Here’s a song called “The Sky is Falling” by Thrice. It’s a reflection on our reaction to 9/11 and the negative consequences borne out of it.