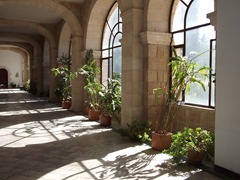 We arrived in Tel Aviv at 8:30 on the morning of November 3.  After a quick cab ride, we arrived at the French School of Bible and Archaeology in Jerusalem – a Dominican school founded in the 1890s and home to some of the greatest Biblical Archaeologists in the world – including Jerome Murphy O’Conner and one of the leading experts on the Dead Sea Scrolls (I must admit that I geeked out pretty hard when I got to meet these guys!).

Nearly everyone who lives in the school is a Dominican brother.  Father Thomas, my friend and traveling companion, is good friends with Father Kevin, who is studying for his doctorate at the School (and the reason we’re allowed to stay there).  Despite the fact that we’re both pilgrims (and Americans) and I’m a Protestant, the Dominicans are exceptionally hospitable and nearly all of them speak at least passable English (Thomas pointed out to me that – given that I am only fluent in English and German, visiting a French school in Israel is probably not the best place to use German). 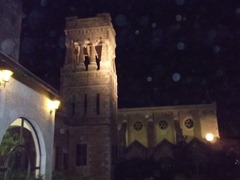 We eat meals together and observe morning and evening prayers, as well as daily mass, in the beautiful and amazing Basilica of St. Stephen, which is on the grounds of the School.  When the Dominicans purchased the property at the end of the 1800s, they had no idea that beneath the property lay the remains of a 4th century church.  When they began digging foundation, they discovered the old church, excavated it and built the new basilica on the original floor plan.  The current basilica is the largest church building in Jerusalem, and it’s absolutely gorgeous.  Outside, you can still walk on stones that date from the fourth century, as well as see a cistern original to the first church, though it’s not used today.

My room is in a secondary building the brothers use as a guest house.  Apparently, before they purchased it, the building had been used to slaughter cows – there’s a pit immediately outside where they used to dump the offal.  I have internet in my room and the weather makes not having air-conditioning a non-issue.

After we settled in, Kevin took us on a quick walking tour of the Old City – a three-minute walk from the School. The Old City deserves its own post, but this was my first experience with the holy sites.  We visited the Church of the Holy Sepulcher, which houses the rock of Golgotha (where Jesus was crucified), the site where they prepared his body for burial, the tomb in which he was buried and the site where he appeared to Mary Magdalene after he raised from the dead.  We didn’t take much time (because we will go back), but even the brief moments we were there were indescribably special.

We returned, ate lunch, took naps and then did evening prayers and dinner.  After dinner, Thomas, Kevin and I went back into the city to have drinks.  Kevin told us more about life in the city, whetting our appetite for the next day…

One final fun fact (well, not fun for me): the Middle East is crawling with cats.  They are everywhere and they are feral.  The School keeps quite a few cats on their property (probably close to a dozen).  They’re relatively tame; an American named Tom who lives at the school feeds and cares for them.  They’ve had all the cats spayed/neutered and the cats function to keep the wild cats out of the School’s grounds.  I suppose this is a great example of the principle that the devil you know is better than the devil you don’t…