Saturday, November 6 was our day to take on the Great Pyramids of Giza.  The Great Pyramids are one of the Seven Wonders of the Ancient World (and the only wonders still standing).  They were built 4500 years ago by three Pharaohs in succession.  Each pyramid is made up of some 2.5 million identical blocks that weigh thousands of tons each.  They are burial plots (and the largest of over 70 similar structures all over Egypt).  They’re destroyed in nearly every disaster movie.  They’re shrouded in mystery and UFOlogists have all sorts of theories about extra-terrestrial involvement in their construction. 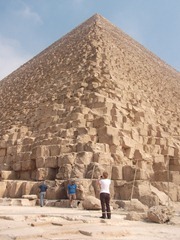 I knew all of this – like you probably do – because these are some of the most famous landmarks (monuments, tourist attractions, wonders) in the entire world.  So I honestly wasn’t sure what to expect when we arrived at the Giza Plateau above Cairo and Cheops’ Pyramid emerged out of the clouds (smog?).

These things are HUGE.

I know that probably sounds trite or redundant, but I was taken aback by the physical presence of these things.  Until I stood at their base and looked up, I couldn’t grasp how monstrous they truly are.  I had always thought you could run up the stones, but each block is over five feet tall.  Experienced climbers have died trying to scale them (Mark Antony actually did it, and it’s illegal nowadays). 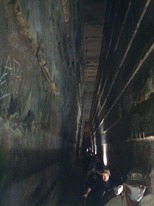 Thomas and I paid the extra to enter the Great Pyramid and clime into the burial chamber.  The experience was spooky – and we had the benefit of built-in stairs and lights; I can’t imagine doing it with maybe a rope and torch.  The burial chamber itself was relatively (to the entire structure) small – still big enough to accommodate 20-30 tourists easily.

We then walked around the Pyramids, exploring the ruins of the administrative complex, the smaller tombs of the Pharaohs’ wives and mothers and the pits from which they’d excavated the royal boats with which the Pharaohs had been buried, making our way down towards the Sphinx.

And these things are so ancient.  These were built over 500 years before Abraham was born.  We are closer to Jesus than Jesus was to these pyramids.  They’re OLD.  And HUGE.  It’s easy to feel that there must be something otherworldly about them.

The most shocking aspect of the Giza Plateau was the selling.  We couldn’t walk more than a few steps without someone grabbing us and trying to force money out of our hands.  One man came up and grabbed my camera out of my hand, then tried to get me up on his camel (once you’re up, you have to pay to get down).  I refused, but he still dressed me like an Egyptian (with a headdress and scarf) and took my pictures.  Then he tried to get money from me; I grabbed my camera and resolutely refused, and marched off (managing to give him his gear back and reacquire my hat).  This pattern persisted – acknowledge that these guys exist in any way (even eye contact!) and you’d better run.  Apparently the government has cracked down pretty substantially on this practice – Mark Twain wrote that it ruined his trip to Egypt.

(In fact, these were not the cleverest of the scams – quite a few men wore very official looking outfits and would stand on the way to a pyramid or sphinx and demand you go buy a ticket, then try to direct you to a co-schemer who would gladly take money you don’t actually have to pay.  If you simply walk past them, they start shouting at someone else.)

Surprisingly, the con-artists thinned out down by the Sphinx and we were able to enjoy a (relatively) unadulterated view of this crazy statue.  I didn’t realize that the Sphinx has a full body; I’d always assumed it was just a bust.  But in fact it has hind paws, a tail and a butt, or sphincter as Anthony Mako wanted me to point out.

After Giza, we enjoyed a trip down the Nile in a felucca, which was peaceful and relaxing (a nice chance from the insanity at Giza!)

Sunday we headed out to the Egyptian Museum, which was built around 1908.  King Tut’s tomb – whose riches now take up about 1/4 of all the museum’s space wasn’t discovered until the 1920s, so you can imagine how crowded it is.  It’s also very old school – not laid out well, not well-lit (apparently, they’re getting a whole new museum ‘one day’ so they’re just waiting for that to fix everything).

I loved seeing all the artifacts in here – wood, paper, flesh (you know, on the mummies), all of it 3,000-4,500 years old.  To see the remains of such an old and totally foreign civilization, to know that they’ve been gone from the Earth longer than I can even imagine was hard to get my brain around.

To see their chariots, and know that – as silly as they look now – that technological breakthrough made Egypt an unquestioned military power for hundreds of years.  To see the statutes and monuments and models and on and on and on.

Ancient Egyptian religion also fascinates me – the gods with animal heads.  As a kid, I always thought it was so bizarre (and shout-out to Stargate, loved their reinterpretation of the whole thing).  But looking through the museum, I could see so many similarities to the ancient Israelites’ religion.  King Tut’s tomb even contained an Ark of Anubis that is clearly similar in structure (we don’t know exactly what it was for) to the Ark of the Covenant (even though Tut was a Pharaoh of the Middle Kingdom, which means he ruled long after the Exodus). 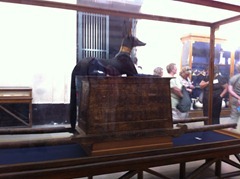 The Giza Plateau and Egyptian Museum only confirmed how far I am from home, how strange and alien the world of the Ancient Egyptians would have been to me.  And yet the ancient Hebrews would’ve had much more in common with Egypt.  Abraham, Jacob, Gideon, certainly Moses and even Jesus would’ve felt much more comfortable in Egypt than in my home.

This was a great reminder that I am the stranger to the Bible.  I can’t assume I know what it means from a cursory reading, or that ‘what it says’ is necessarily what it means.

Because it was written by some people that I would’ve found very strange indeed.