The Beard Goes Home is an ongoing chronicle of my trip to Israel, Cairo and Rome from November 3-18.  If you want more information on a picture, hover your mouse over it for a pop-up caption.  If you want to see a bigger version of the picture, click on it.

Thomas and I landed in Rome on Monday, November 15.  We made it to the Angelicum, a Dominican school where we’d be staying, and settled in for the night.  Just after I’d gone to bed, Thomas came

to my room to tell me that a family emergency had come up and he would have to fly home ASAP.  The earliest he could arrange was Wednesday morning, so on Tuesday we met up with a group from his parish in Columbia as originally planned and took a whirlwind tour of the city.

I confess that I was very nervous about Thomas leaving.  I’d never been to Rome and didn’t know my way around; I was also feeling very ready to get back to Dayton.  All of these emotions were strange to me – I’m usually much more adventurous, so I spent some time in prayer and reflection and determined to make the most of my time.

Rome turned out to be a city where it’s easy to get lost in the trees, but the forest is (relatively) easy to navigate.  Once I’d gotten a good sense of how the famous Seven Hills are laid out, I could figure out how to get back to the general area of the Angelicum.

We managed to see a good many sites for as little time as we had, though since the rest of my group was Catholic, it mostly revolved around art and the 17 billion or so churches in Rome.  We took in St. John’s of Lateran (the Pope’s actual church), St. Peter’s (including the Vatican Museum, St. Peter’s bones and the Sistine Chapel) and several Caravaggio’s.

One of the highlights of the trip was our Wednesday audience with Pope Benedict XVI, with about 20,000 people from all over the world.  He addressed us in a half-dozen languages – the same five-minute homily to each group.  After being in Israel, I was shocked at how lax the security surrounding the whole Vatican was (unless those goofy Swiss guard uniforms grant secret superpowers).

For me, though, the Roman ruins were definitely what I was most excited to see – especially anything pre-Constantinian (315-330 CE).  This was a lot tougher than I thought it would be because Rome has been Christian for so long.  It turns out that we’ve done a great job of Christian-izing pretty much everything in Rome.  Even the red-granite Egyptian obelisks that are all over the city all have crosses or statues of Peter and Paul on top of them.  All those marble columns that surround Vatican square?  Their marble used to cover the Coliseum.  The grand Circus Maxims, that made Herod’s circus in Caesarea Maritima look like a little league stadium?  It’s basically a big strip of grass with some stairs cut into it.  The Pantheon, a temple built to all the Roman gods is now a church dedicated to all the Christian martyrs. 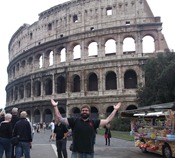 As a person of faith, I get it.  Rome was the capitol of the Roman Empire (I’m sure this is not a news flash).  The monuments to the pagan gods were just as widespread in the city as Christian churches and monuments are now.  But the history nerd in me weeps over the artifacts and monuments that have been lost (or destroyed).  The church (and the Empire) found it expedient to recycle – to tear down old monuments to men and gods long dead in order to build new monuments to the new kings and new God of Rome.  It was cheaper and it erased from history the records of the Other cultures.

This is something I’ve seen over and over in this trip – the new cultures and religions cannot abide the old, so they destroy and replace.  Caesarea Maritima was a great example of this – it changed rulers five times before it was abandoned, and each army destroyed what was there and built their own monuments.  Mt. Megiddo was the same.  Not to mention the city of Jerusalem (::cough:: Temple Mount ::cough::).

And, of course, Rome.

But I wonder if we could try something different.  What if, instead of looking at these structures and monuments as Other, we instead celebrated the good in them.

The ancient Temples are beautiful in their way, and they’re certainly marvels of architecture.  I can confess that without praising Roman gods (or Muslim or Canaanite or whatever).  I can wonder at the ingenuity and power of the human spirit that is, after all, created in God’s image without worrying or feeling threatened.  That creative drive that led to the construction of Cairo’s ubiquitous mosques and Rome’s obelisks, columns, arches and temples is the same creative drive that spawned the enormity of St. Peter’s and the beautiful churches that mark all the sacred sites in the Holy Land.  It’s the creative drive that we have been given by our Creator, and I believe that we can celebrate it in a way that honors the Gospel without compromising it.