The word ‘Armageddon’ has become synonymous with the End of the World. It conjures in our minds epic wastelands destroyed by the War-to-end-all-wars. The few humans who are left eek out meager existences from the scraps left behind. Violence. Destruction. Mayhem. These are the words and images that come to us when we imagine the End. 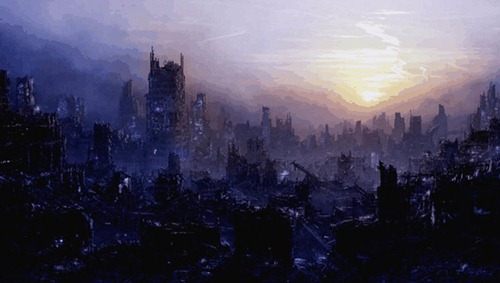 What, exactly, is Armageddon according to the Bible? 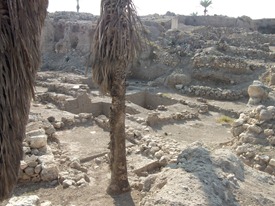 Armageddon is a Greek transliteration of a Hebrew place name. A hill in central Israel called Megiddo has been a center of Ba’al worship dating as far back as 3500 BC/E. King Ahab – considered by Biblical authors to be pretty much the most evil king in Israel’s history – made Megiddo one of his three major administrative centers. And when King Josiah – considered to be one of Judah’s greatest kings – tried to stop Pharaoh Neco, he was defeated and killed at Mt. Megiddo.

In the Hebrew imagination, Mt. Megiddo came to stand as a center for those who opposed God. It was the original Sin City.

Writing in Greek in the late first century AD/CE, John the Seer imagines the End of History. In Revelation 16:13-16, the unholy Anti-Trinity (John’s Dragon, Sea Beast and Land Beast) summon all the forces of the Earth to be a part of their army, to “gather them together for the war of the great day of God, the Almighty”. The place they gather them?

The demonic spirits gathered all the rulers and their armies to a place with the Hebrew name Armageddon. – Revelation 16:16 (NLT)

The Greek reads Armageddon. The Hebrew is Har Mageddo, which translates in English to Mt. Megiddo. Armageddon is the site of the final, climactic battle between God and the forces of Evil.

And for the Biblical thinker, what better place for the forces who oppose God to gather than the original Sin City?

So far, so good, right? The armies of evil have gathered at Armageddon to war with God and the Lamb. This sounds more-or-less like what we think of when we hear ‘Armageddon’. So bring on the War to End All Wars!

The Violent Return of a Prize-fighter Jesus* 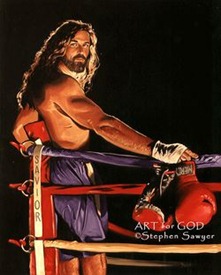 Surprisingly, the battle doesn’t happen for another three chapters. But finally, in Revelation 19:11-21, Jesus shows up, riding a white horse and leading the armies of heaven. He defeats the evil armies and wins the day. A cursory reading of this passage lends itself to all sorts of violent, pro-war theologies (as some pastors love to read it).

It’s easy to see why this passage has generated all the negative connotations Armageddon has in our popular culture. Some interpreters even pull in Revelation 14:20, imagining Jesus riding in, swinging his sword, cutting down every enemy so that blood pools up feet high for miles and miles in every direction. It’s a gruesome, bloody image that rightly strikes fear in our hearts. But is the image itself right? Is this a good interpretation of what happens at Mt. Megiddo?

Even ignoring the fact that Revelation 14 is before the battle at Megiddo, we must remember that Revelation as a book critiques violent responses to Empire, and the ‘Battle’ of Armageddon is no different. Let’s look carefully at the Jesus we meet riding on the white horse:

I saw heaven opened, and there was a white horse! Its rider is called Faithful and True, and in righteousness he judges and makes war. His eyes are like a flame of fire, and on his head are many diadems; and he has a name inscribed that no one knows but himself. He is clothed in a robe dipped in blood, and his name is called The Word of God… From his mouth comes a sharp sword with which to strike down the nations, and he will rule them with a rod of iron; he will tread the wine press of the fury of the wrath of God the Almighty. On his robe and on his thigh he has a name inscribed, “King of kings and Lord of lords.  — Revelation 19:11-16 (NRS) 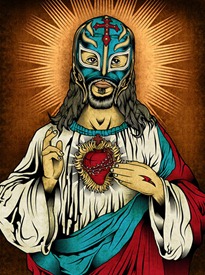 These are all images that have been used to describe Jesus throughout the book (most notably his first appearance in Chapter 1). But look at his robe: it’s already dipped in blood. Jesus has already been killed. This is consistent with the second time we meet Jesus in Revelation 5. We are told to look, to  “See, the Lion of the tribe of Judah, the Root of David, has conquered, so that he can open the scroll and its seven seals. (5:1, NRS)”

But we don’t see a powerful, conquering lion. We see a lamb that has already been sacrificed. This Lamb is now the general leading the armies of Heaven. What kind of armies follow a general who’s already been killed by the forces they’re now fighting?

And notice Jesus’ sword. He’s not wielding it, waving it about, slashing at his opponents. The sword is coming from his mouth. It’s this sword, according to 19:21, that kills the massed army. That matters because the sort of war waged by a slaughtered general with a sword coming from his mouth is a very different sort of war waged by a prize-fighter with a sword in his hand and a “commitment to make someone bleed”.

What Kind of War is Jesus Waging at Armageddon?

The Revelation is clear over and over – Jesus won the last battle at the Cross. That is when Satan was defeated. That is when Evil lost. The rest is clean-up. Believers win not by fighting back, but by remaining true to Jesus (see Revelation 12:11).

But what about that sword? John 3 actually helps us out. John 3:16-21 is a meditation on what Jesus did by coming to Earth. John says,

God did not send the Son into the world to judge the world, but that the world should be saved through Him. He who believes in Him is not judged; he who does not believe has been judged already, because he has not believed in the name of the only begotten Son of God. — John 3:17-18 (NAS)

The word ‘to judge’ in Greek is interesting; it literally means ‘to cut’ or ‘to separate’ – like you would do with a sword. And John says that Jesus did not come to divide the world, to cut it, but that the person who does not believe in Jesus is already cut, divided. Judged. Which is exactly what the Revelation has warned believers against – falling away.

John goes on to reinforce this idea:

And this is the judgment, that the light is come into the world, and men loved the darkness rather than the light; for their deeds were evil. — John 3:19 (NAS)

Jesus comes into the world and finds two kinds of persons. Those who believe in him, who have allied themselves with the Lamb. And those who love darkness rather than light. Who flee from the light. Who would mass together at a place known for its darkness. A place like Mt. Megiddo. Armageddon.

When the Truth arrives (as a sword from the mouth of the Word of God), it will cut. It will divide us. And the Revelation asks, where will you be? Will you be found among the Lamb’s army, or will you be at Armageddon?

Because God is returning to put an end to evil. God will reveal God’s truth, the Way God intended everything to be. And the darkness will not stand in that light .

Why does Armageddon matter? 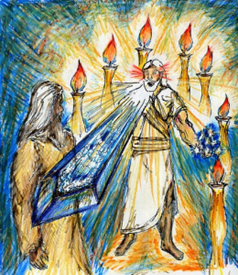 We’re not following a blood-letting general. Our Jesus doesn’t wield a sword in his hand. His sword is the Truth of his Word. It comes from his mouth (and according to Hebrews, it’s sharper than any hand-sword could be).

We ought to concern ourselves not with warring against our enemies (be they ideological, political or religious) but with living out the Truth we see in the life of Jesus. The Truth we find in following the Lamb Who Was Slain. We don’t have to win any wars – not Truth Wars or Marriage Wars or anything else. Jesus fought the only war that matters, and won by dying. Our call is only to be faithful to him.

What do you think of Armageddon? Is this picture more appealing? Why?

*Greg Boyd has written a great, extensive critique of this picture of RJesus. It’s worth your time.