A couple of years ago, I listed my favorite iPhone games. A lot of new games have come out since then, so what old games have staying power, and what new games are worth a look? Click on any of the game titles to buy it in the App Store.

A typical tower-defense game in which you’re a homeowner. You plant various flora whose special attributes keep the zombies at bay. The game has a lot of replay value, and the developers keep adding achievements. There’s enough to unlock – and it’s just frustrating enough to save up enough – that you’ll be playing for hours. A couple of the levels even get genuinely tough. Tons of updates and new ways to play have made this already fun game well worth the investment if you haven’t already got it.

Both of these games are worth endless hours of fun. One simple control – swiping your finger to throw/toss the ball, and that’s it! Flick QB has several game options and lots of achievements that give the gameplay some variety. The graphics look great – better than they need to be for this game to be fun, which is a real treat.

Skee-Ball has tons of toys, balls and game boards for you to buy… with the tickets you earn in the game, of course! Anyone can pick these games up and have fun, but they reward skilled players, too! This game will induce major childhood flashbacks. 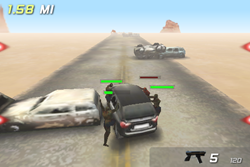 A real gem that hasn’t gotten a lot of attention: You’re one of the last survivors of a zombie apocalypse and you’re trying to get… somewhere. Drive down the road (with excellent tilt-controls) and fight the zombies off your car. You can either shoot them (limited ammo, of course) or use the abandoned cars on the highway to brush the zombies off your car. Tons of fun, lots of levels of difficulty, plenty of achievements and great weapons to unlock. Plus, the game developers have regularly put out updates that expand the gameplay since I bought it. Well worth the buck. 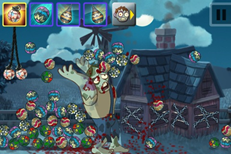 This was one of my favorites back in 2009 and it hasn’t changed. Zombie Smash is a fun, addictive game in which you’re defending your homestead from hungry legions of undead.  How?  By flinging them with your thumbs.  It’s got a great set of up-gradable weapons, quite a few types of zombies (each with its own characteristics) and difficulty settings to keep it plenty tough.  Add in plenty of achievements and the upgrades they keep putting out, and the fun never stops!

These two little games are incarnations of the same basic principle: you’re trying to deliver the candy successfully to Nom, a cute little frog-like critter with a big sweet tooth. Along the way, you’re trying to collect stars – three per level – but for the most part you’re going to have to play the levels a few times to figure out the tricks. Each “box” has its own unique addition that enhances gameplay: you can flip gravity in one, use magnets in another, teleporting magic hats or even rockets! Another pair of games with great achievements and consistent updates that makes a buck a game a worthy investment for such great time-killers. 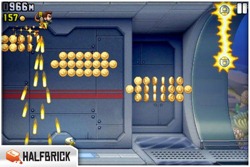 These two games have the same simple, single-touch gameplay. But both are very fun and challenging in their own rights. In Jetpack Joyride, you’re trying to escape from a research lab with a stolen jetpack. Touch the screen to fly higher, let go to drop down. Avoid lasers and such, complete mini-missions to level up and collect coins. You can buy tons of upgrades and costumes, which keeps the game feeling fresh. And there’re enough achievements to keep you coming back again and again. It seems like every time I get bored with this game, they put out a new update. 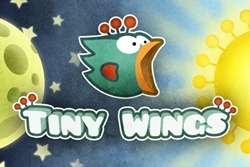 Tiny Wings is a little different – you’re a fat little bird who can’t quite fly. Instead, you take to the air by sliding down hills and vaulting into the air. Touching the screen makes you dive, letting go slows your fall. You fly from island to island, flying as far as you can in a single day. This game is all about timing, which can get maddening. Earning some of the higher-level achievements can seem nearly-impossible, which leads to closing the game in disgust, only to come back later to try again. It’s also worth mentioning that this is one of the best looking games I’ve seen on the iPhone.

Hanging with Friends (FREE with ads)

Sort of a hang-man version of the Words With Friends model. Come up with words your friends try to solve – the more letters you use, the fewer guesses they get. Then try to guess their words, too. Run out of guesses and drop into the lava (deaths are totally PG rated). The ads are obnoxious, and it takes forever to save up money to buy any of the unlockables, but if you’re just looking for a word game to play against some friends, you could do a lot worse! 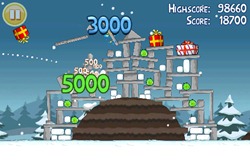 Angry Birds was one of my old favorites and it’s stayed up there with tons of new levels. Seasons is another full game with plenty of new levels. If you’re new to the Angry Birds world, you’re a group of birds who are trying to rescue their eggs from pigs who’ve taken them captive. You do this by hurling yourself into their stone-and-wood fortresses and collapsing them onto the pigs. Amazing Breaker is more of the same, except you’re using bombs to break ice.

The idea in all three games is to use projectiles (birds or bombs) with different qualities to destroy as much of a target (pig fortress or ice sculpture) as possible. Beating most levels isn’t that tough. Trying to clear 100% of most levels is guaranteed to give you a stress-headache, which means hours of gameplay for you. All three games are challenging and fun, and getting every level perfect will suck up hours of your time.

What are your favorite iPhone games?