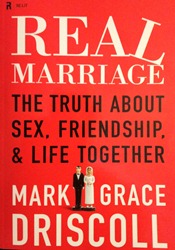 If Love Wins was the most controversial book last year, Real Marriage by Mark and Grace Driscoll is set to win the award this year. Mark Driscoll has long been in the public eye as a confrontational, no-holds barred pastor who likes to shout. Theologically, he’s part of the New Calvinist movement and a staunch Complementarian when it comes to gender roles. It’s this stance that’s drawn him the most attention, from his popular, candid and sexy Song of Solomon tour to blaming Ted Haggard’s public fall on his wife (because she “let herself go”), from claiming that stay-at-home dads in his church would be subjected to Church discipline to praising Jesus as a blood-thirsty, sword-wielding UFC fighter.

So when, in the wake of yet another controversy over gender, Driscoll announced that he and his wife would be writing a book on marriage, the Evangelical world was intrigued to say the least.

So how is the book? Well, unsurprisingly, there aren’t really any surprises. But in the preface, Driscoll makes a plea to us:

Don’t read as a critic trying to find where you think we might be wrong. Although we seek to be faithful to the Bible, this book is not the Bible, and, like you, we are imperfect, so there will be mistakes. Take whatever gifts you find in this book, and feel free to leave the rest.

I suppose that’s a fair request, and while it’s not in line with the persona Driscoll is famous for, we can (and should) extend him this grace. And, all in all, it’s a really good suggestion.

Real Marriage isn’t all bad, however much Driscoll’s critics wish it was. But there’s plenty to be leery of.

Early in the book, Driscoll comments:

This statement reveals major strengths and weaknesses of Real Marriage.

One thing the Driscolls do well is drag the issue of sex out into the harsh light of discussion.

Much like the questions Bell raised in Love Wins, the topics Real Marriage addresses are being asked in our culture and in the Church (albeit behind closed doors). But most pastors won’t touch them with a 10-foot pole. Like it or not, Real Marriage is going to remove the option to pretend sex isn’t an issue.

The Driscolls are also very open and transparent. They deserve to be commended for this. 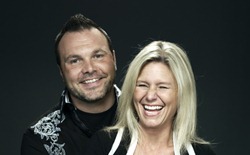 Both Mark and Grace share openly and honestly about their own stories and the struggles and victories in their marriage. They do not come off as people who’ve done everything right, or as people who have all the answers. And while we could (and should, as my new friend Dianna does here) critique the tone of their story-telling, the fact is they are very forthcoming in Real Marriage. And that takes a lot of courage.

But for all the good in Real Marriage, there is plenty of bad.

Mark and Grace speak for God a lot in Real Marriage. Their theology is readily apparent throughout the book, and what’s presented isn’t open for discussion. It’s all take-it-or-leave-it. And it’s all done with the characteristic New Calvinist disregard for interpreter’s context.

Like many of his peers, Driscoll’s handling of biblical texts suggest that he doesn’t take into account his own cultural biases.

For instance, Driscoll includes a mini-commentary on a passage from Titus:

The Bible plainly says, “If anyone does not provide for his own, and especially for those of his household, he has denied the faith and is worse than an unbeliever.”

Now, since this is so “plain” to Driscoll, he goes on to blast men who do not work outside the home. He does make an allowance – sort of – for working moms:

Admittedly, a wife working before kids are born, or who finds a way to make money from home without neglecting her first God-given responsibilities of Christian, wife, and mother is acceptable. But men, you should make money. You should feed your family.

Driscoll’s interpretation of this passage has been dismantled thoroughly elsewhere, but note that Driscoll’s model of family assumes that “family” means the “Post-Industrial Revolution White Middle-class Nuclear” family. But such a family structure is totally foreign to the Biblical world. In fact, the type of marriage the Driscolls describe in Real Marriage isn’t based on a single biblical couple. (To be fair, they do lean heavily on Song of Solomon. But assuming the author is Solomon as they do is problematic, since according to the Scriptures, he had over 300 wives, which makes him sort of a polygamist.)

Marriage for the Driscolls seems to be a reinvigorated idealization of the Leave it to Beaver family. And this family is every person’s created intention. The Driscolls assume full personhood is found in marriage and childrearing. Anything else is sin. There’s no picture of Biblical singlehood. Little discussion of how married and single person integrate into one larger whole in the Church.

What’s problematic for me is that none of these commands the Driscolls offer us from the Bible are actually followed by Jesus or Paul.

Both men would, according to Driscoll’s own criteria, belong in the “boys who shave” category. When your theology of personhood excludes the fullest picture of human personhood we’ve been given, you should definitely at least reevaluate your stance.

The most problematic aspect of Real Marriage is a total lack of a strong, clear picture of healthy Christian sexuality.

Don’t misunderstand me. There’s plenty of talk about sex. And like everything else in the book, it’s an inseparable blend of helpful and hurtful. For instance, Mark makes this statement early on in the book:

The previous church I had attended was Catholic, with a priest who seemed to be a gay alcoholic. He was the last person on earth I wanted to be like. To a young man, a life of poverty, celibacy, living at the church, and wearing a dress was more frightful than going to hell, so I stopped going to church somewhere around junior high. But this pastor was different. He had been in the military, had earned a few advanced degrees, and was smart. He was humble. He bow hunted. He had sex with his wife. He knew the Bible. He was not religious.

It’s a shame that the priest Mark knew was such an uninspiring person. I’ve personally known priests – and other single, celibate Christians – who live full and inspiring lives. Again, we’re missing a compelling vision of sexuality that includes a place of honor for celibate persons.

But it’s also weird, isn’t it, that the other pastor’s credibility stems in part from his apparently healthy sex life? Don’t get me wrong, I hope everyone’s marriage has a healthy sex-life, but that’s not the vibe I get from Mark’s descriptions of these two guys. It’s more of a machismo vibe that’s disturbing. I hope that I as a pastor don’t have to prove my sexual exploits to my congregation for them to take me seriously as a man and a pastor.

Instead of a clear picture of healthy human sexuality, Real Marriage mostly offers us unfair assumptions, over-generalizations and unhelpful stereotypes. 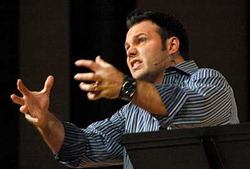 If you’re familiar with Driscoll, nothing in Real Marriage is surprising. The hyper-masculinity is in there. The demeaning language is there. The creepy preoccupation with sex is there. The love-it-or-hate-it “The Bible has a Context but I don’t ” approach to the Scriptures is there (I hate it).

But so is a real passion for healthy marriages. And it’s clear that the Driscolls’ passion is grown in the context of ministry. It’s not abstracted – in fact, a little more abstraction might do their theology well.

At the end of the day, if all Christian marriages looked like the marriages the Driscolls describe in Real Marriage… well. The Church could do a lot worse. We are doing a lot worse.

Ultimately, this book will greatly please Driscoll’s fans. And just like everything else he does, people on both sides will hate it for different reasons. Personally, I think the Driscolls’ approach to the Scriptures is abhorrent. But literally thousands of people disagree with me on that. So a question I can’t really answer is “Is this book good?” That’s not really a fair question. 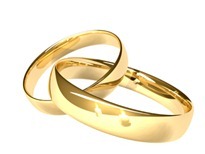 A question I’m more interested in is: Is this book useful for creating healthier marriages?

So as a person who is married, has many married friends and has lived through multiple failed marriages, I answer No, it’s not. Real Marriage is a far too-mixed bag of good and bad to be something I would realistically use. It’s more than an issue of skipping certain chapters. It’s nearly a line-by-line analysis. I found myself murmuring “Oh, that’s very good!” only moments later to toss the book down in disgust at the subsequent line.

The fact is, Real Marriage isn’t the only marriage book out there. Not by a long shot. It’s not even the only book to discuss sex both candidly and from an Evangelical perspective (Sheet Music by Dr. Kevin Leman, for instance, does so better and more affordably). Henry Cloud is an excellent psychologist who has several helpful marriage books. Rodney Clapp’s Families at the Crossroads is a better theoretical look at what marriage and family look like as we move into the future. There are much better options for those wanting to prepare for marriage, grow in their marriages or find healing in or from a broken marriage.

Bottom Line: Though it’s certainly not all bad, the helpful and the harmful in Real Marriage are too thoroughly intertwined to be helpful.

YOUR TURN: Have you read Real Marriage? What did you think? What other books on marriage have you found to be helpful?

Disclosure of Material Connection: I received this book free from Thomas Nelson Publishers as part of their BookSneeze.com book review bloggers program. I was not required to write a positive review. The opinions I have expressed are my own. I am disclosing this in accordance with the Federal Trade Commission’s 16 CFR, Part 255: “Guides Concerning the Use of Endorsements and Testimonials in Advertising.”