Check out Monsters in America on Amazon!

Why does every culture tell monster stories? It’s a fascinating question. An excellent book I’ve been reading lately by Scott Poole suggests that monsters are a safe way for us to talk about those aspects of our culture we’re not particularly proud of.

Master narratives are, by definition, lies and untruths. This is why we need to study monsters. They are the things hiding in history’s dark places, the silences that scream if you listen closely enough. Cultural critic Greil Marcus writes that “parts of history, because they don’t fit the story a people wants to tell itself, survive only as haunts and fairy tales, accessible only as specters and spooks.” 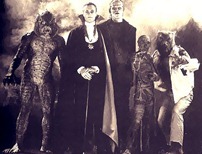 Scott works wonders with this methodology in his book (which you should absolutely check out if you’re a horror movie junkie at all!

You might also recognize this approach to monsters from Matt Mikalatos’ excellent book Night of the Living Dead Christian. Matt uses traditional monster movie tropes to explore issues of spiritual formation. I’ve already written at length about how hilarious and awesome NotLDC is. In fact, I liked it so much, we ripped it off for our current sermon series.

So for the next few weeks, rather than retread ground that’s already been covered to such great effect, I’m going to follow Scott’s approach more closely. Scott says,

Seeing America through its monsters offers a new perspective on old questions. It allows us to look into the shadows, to rifle through those trunks in the attic we have been warned to leave alone. Not all of our myths will make it out of here alive.

In this series of posts, I’m going to explore some of the monsters Evangelical Christianity has created. We’ll look at how the persons (and people groups) have been mythologized and misrepresented. We’ll also ask why: what do we gain by projecting our fears onto these “monsters”?

You might be a bit confused: Christians generally don’t talk about monsters – some Churches won’t even acknowledge Halloween! So how can we have monsters?

But the Church does have her demons. We’ve marginalzied and silenced whole groups of people who aren’t like us. Others who make us uncomfortable, whose beliefs and lifestyles make us question our own closely-held convictions. So rather than embrace that discomfort, we demonize them. We create monsters so we can silence them.

What monsters have we created? Who lives in the cracks of our story? 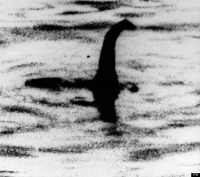 Nessie is more legit than the monsters we’ve created for ourselves!

None of these characterizations are true. They’re not honest. And they say a lot more about us than they do about the groups we’ve monster-ized. I’ll be taking time to explore each of them in this series.

I hope you’ll join me. If we face these Christian monsters together, we can be more honest about the dark places in our own souls. We can dispense with the monsters we’ve created and engage those who are not like us with love and compassion. And hopefully we’ll realize we have a lot more in common with the Scary Other than we thought.

Do you agree with my list of Christian monsters? Would you add any? What do you think our monsters say about us?