Obama the Muslim, Romney the Christian: Why Can’t We Vote for Someone Who’s Not Like Us?

As election day inches closer, the campaign rhetoric continues to heat up. And as in previous years, religion is at the forefront. This year, however, Evangelicals are faced with a dilemma we’ve never faced, at least not in our lifetime.

And Barack Obama is a practicing Christian, a long-time member of Trinity United Church of Christ in Chicago.

But primarily because of Obama’s views on Abortion (he’s pro-choice) and Gay Marriage (he favors it), Evangelicals as a whole – and especially Evangelical leaders – have been unwilling to support Obama despite his Christian faith.

In the last election, between two Christians, this wasn’t a problem for Evangelicals because McCain was a Christian. This election is totally different.

Unfortunately, the conversation in Evangelical churches is not proceeding in these terms. Instead of acknowledging the complexity of this particular election season, many Evangelicals are making dangerous assumptions about the nature of allegiance and religious truth.

As has been true since the last election, some on the far right fringe of the Evangelical movement claim that Obama is not a Christian. According to some polls, nearly 1 in 5 Republicans believe Obama practices Islam. And websites as popular as Conservapedia claim Obama is Muslim. All this despite Obama’s very public declarations and practice of Christianity.

Last week, Evangelical Godfather Billy Graham made headlines when, after meeting with Romney, he removed all explicit references to Mormonism as a “cult” from his website. Yesterday, his son Franklin posted an article explaining that Christians can (and should?) vote for a Mormon presidential candidate. Yet the website’s definition of a cult still all but explicitly calls Mormonism a cult in their definition page. The second paragraph here describes Mormon theology accurately.

Mormonism holds that Jesus is the biological son of God and brother of Lucifer. While the Nicene Creed clearly states that Jesus is “begotten, not made, of one being with the Father,” Mormonism declares that Jesus is a separate being from God. Jesus, in Mormon theology, was made, not begotten.

This doesn’t make Mormonism a cult, but it does mean (as Tony wrote) that Mormonism is a separate religion from Christianity. Mitt Romney, if he is a practicing Mormon, is not a practicing Christian. The God he worships is an essentially different god from Yahweh, the Triune god of the Scriptures and affirmed by historic, orthodox Christianity.

The confusion Graham’s website evinces over Romney’s non-Christian faith is dangerous. So is refusing to acknowledge Obama’s Christianity. 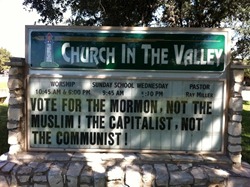 Not okay. For a lot of reasons.

It’s not okay to denigrate a fellow Christian’s faith because you disagree with him on important, but non-essential issues. That creates a false image of God, one we don’t find in the Scriptures. It’s idolatry.

It’s also not okay to assume because someone’s political views match yours, they must really worship the same God. That’s also idolatry.

We must let the political landscape be complex. To insist every candidate we support be exactly like us, and everyone we oppose be not like us is reductionist.

YOUR TURN: Should Christians only vote for Christians? What’s an appropriate Evangelical response to this election season?