1. Out of the Boat, Into Darkness

Can’t see anything? Yup. That’s about right. This is our boat.

The outboard motor died and silence settled over the water like a shroud. Our guide’s broken English pierced the darkness:

I looked over the side at the water. Were those rocks, visible just below the surface of the water? Or was the surface reflecting faint ambient light back onto the clouds above? We had been riding for nearly a quarter of an hour, and the lights of tiny dock had long faded into the distance. Ahead lay only the silhouettes of a Mangrove forest, their slightly blacker forms standing sentinel below the night sky, seawater lapping at their trunks.

As the rest of the newly-minted crabbing crew milled uncertainly in the boat, I hooked my legs over the side, grabbed the small, trident-shaped crab-spear and jumped into the depths…

…only to find myself in water barely to my shins. 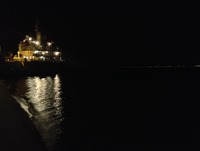 This was not our boat. Ours was much smaller.

The guide was out by then, untangling wires that ran from the motor to a half-dozen handheld lights that he distributed to pairs of us brave warriors hoping to prove ourselves against the briny shallows. Amanda and I struck out on the shore-side of the boat, quick to put distance between us and the other pairs.

I shined the light into the water, wondering if I would even recognize a crab through the refracting sea. Silently, we trudged through the water, hunters dragging our chariot behind us by electrified leashes, six beams of light scouring the seafloor, spears held high in anticipation of prey. 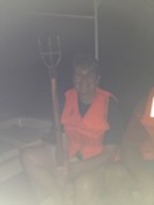 My mom and her crabbing spear

A slow sense of foreboding crept over us until my mom called out,

This is a setup for a horror film, right?

On cue, the creatures began to appear – first harmless fish, barely larger than minnows, darting in and out of the light. Then, from behind, a creature skipped across the surface of the water – once, twice, five times, coming always closer to us before returning below the surface. We laughed to cover our fear, announcing that it must have been a fish as though we were offering one another last rites while our imaginations conjured some Cthuluian beast out of our nightmares.

The guide turned to me:

Mister! Your light! In the water!

Following his example, I plunged my light below the surface, at once marveling at how much more clearly I could see and wondering how many of us would die if one of those lights shorted in the water. 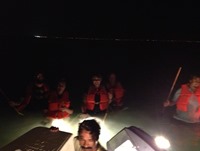 Our Crabbing Crew emerging from the darkness

No sooner had the seafloor opened itself to me, than our guide plunged his spear into the water, then raised up a crab, pierced cleanly through the center of its shell, legs and claws flailing. He returned it to the boat, depositing his prey into a large bucket there.

As though the guide’s offering had been accepted by some dark sea god, suddenly sea creatures were everywhere. A light glowed in the water faintly ahead of me, and stayed in front of me. I saw it was a small squid, attempting to escape without drawing attention to itself. When I thrust at it with my spear, it sped into the inky blackness.

My light caught the brown-and-white body of a puffer-fish, which quickly escaped back into the darkness. Then, suddenly, a short scream errupted from the far side of the boat. Before we could react, a startled sting ray darted between Amanda and me, seeking safer waters. Our light caught another stingray a few yards away, content and undisturbed by our crew.

With a shout, the silhouette of another crewperson – I later learned it was my stepdad – held up his spear with another squid writhing on the end of it. Our crew let out a cheer – it was the first clear catch of the night (not counting the guide). But the guide motioned to the water and intoned gruffly,

A little bit jealous, I looked back into the water and saw a starfish. Having never found a starfish (despite numerous trips to the beach), I scooped it out of the water and into my pocket, forgetting that a starfish in the water is still alive until I felt its arms pressing against my leg, writhing in my pocket.

3. The Pinchers of Defeat 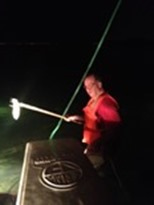 My stepdad and his crab

We pressed on. Shortly, our guide turned to me, light pointing into the water a few yards ahead of me and gesturing with his spear:

Three long strides brought me within sight of the crab. A white streak, glowing in the light, resolved into the creature crawling on its back four legs, pinchers raised high in the water as though defending itself against the light.

Or perhaps they were raised in petition.

I approached the crab, Poseidon denying his supplicant the mercy it sought. I thrust my mighty trident into the sea.

The crab, having received its answer, scuttled off into the murky blackness. I pressed on, trying my best to ignore the guide’s patronizing disdain.

As I continued to search the waters, I was rewarded by a final sight: a flounder. As my light caught its pancake-shaped body, it undulated away, its eyes transfixed by terror on the beam.

Soon, our crew were pulling crabs from the water left and right. My stepdad caught a crab. My mom caught a crab. The Canadian who’d been nervous to jump in at first caught one, as did her Arab friend. The smoking couple who weren’t English speakers caught one.

Meanwhile, I missed three more of the skittish sub-marine devils.

Finally, though Amanda had hung back, choosing to hold the light, she approached a crab, spearing it on her first try and raising it in victory. At her catch, the guide proclaimed

Done! Back in the boat!

You can’t really see me, but these are our crabs. Sound the feasting horn!

Grumbling, we all climbed back in and headed home, 15 crab in a bucket as the fruits of our labor. They cooked the crab when we got back and brought them to us on a platter. We dined as kings and queens of the sea.

If maritime monarchs had to spend 20 minutes cleaning crab meat from rather small crabs, that is. In the end, we had tremendous fun, and it was way less creepy than I tried to make it sound.

If you want to do the crab safari, it’s at the Flamingo Beach Resort in Um Al Qwuain. Details here. 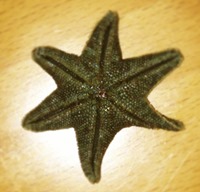 1. It’s a mutant Star-of-David-Fish
2. It now lives only in my nightmares

We returned to Dubai that night and stayed in a hotel. I had forgotten about the starfish in my pocked until we were getting ready for bed. I took it out – now quite dead – and set it on the desk to dry overnight. The next morning, I rolled it in the t-shirt I’d worn on the safari and packed it carefully for the trip home.

Hours later, when we arrived back in Abu Dhabi, Amanda and I did laundry. I tossed all my safari clothes into the wash, not thinking about the starfish until a few hours – and few loads of laundry later. The t-shirt I’d wrapped it so carefully in was clean and folded, and the starfish was nowhere to be found.

I checked the washing machine. The dryer. My backpack. The floors of our room and the laundry room. It was nowhere to be found.

Now each night we try to find sleep while waiting to feel the tiny arms of the missing starfish pressing against our tired flesh, seeking its vengeance.

YOUR TURN: So who wants to go on a crab safari with us?

Why My Wife is AwesomeInfluence 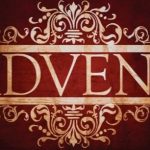 What is Advent? Everything You Need to KnowInfluence, Teachings, The Bible