Why My Wife is Awesome

My wife Amanda turns 28 today, and there’s nothing I like more than an excuse to shout her praises from the (virtual) rooftops. So if you’ll indulge me, in Acrostic fashion, here’s why Amanda is awesome: 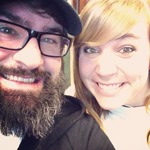 Amanda is one of the most laid-back people I know. It’s not that she doesn’t care about anything; she just really loves everything an everyone. And since she’s always putting other people ahead of herself, she’s totally willing to go anywhere, do anything, try everything at least once. I’m always learning to be more relaxed and content in my current circumstances from Amanda’s example. 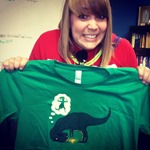 Amanda feels bad that T-Rex has such short arms.

Unless you know Amanda well, this word probably didn’t come to mind when you think of her. But her closest friends know she is feisty. She’s so nice (more on that below) that those who cross her don’t see that side of her, but she’s got a little anarchist in her that comes out every now and again. Since I’m a lot anarchist, I love this about her.

It’s not hard to get Amanda to plan a prank or participate in a surprise party (though she hates having to keep secrets).

And this isn’t really mischievous, but Amanda is also the queen of corny jokes. Ask her where the general keeps his armies (or follow her Bridge Café twitter account) 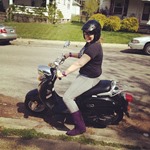 We got Vinny the scoot because Amanda wanted one

Even before we met, Amanda was adventurous. She’s lived in Mexico, Spain and El Salvador. She loves to travel and no experience is off limits. She’ll try any new restaurant. She’s always up for a road trip or exploring a new part of town or a new trail in the woods. She’ll try any movie and loves to read just about any genre of book. She loves to meet new people and is always collecting friends. 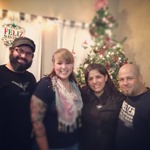 Our most recent trip to Mexico

Seriously. Amanda is probably the nicest person in the world. Even if she thinks something bad about a person, she won’t say it. Her smile and whole demeanor are so welcoming and friendly that she’s one of the most naturally gifted hosts I’ve ever met. She has a supernatural ability to make people feel at ease (I wrote about it last year on her birthday).

Amanda’s hospitality makes her the quite core of the groups she’s a part of. She’s the heart and soul of the people around her.

At a wedding, the night of the now-famous ‘Baby Got Back’ contest

Amanda is very real and accessible. She doesn’t mind getting dressed up when the occasion calls for it, but she’s much happier in sweats and a t-shirt. Or even better, her own fun, crazy and unique style. If you know her, you know what I’m talking about. She gets told on a daily basis how fun her “look” is.

Amanda’s also a great conversationalist. She’s not intimidated by new people, and excels at getting to know them and their stories. She’s instantly disarming in a way few people are. 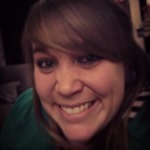 One of my favorite pictures of Amanda, from the 11th day of Christmas 2012

She prefers to call herself crafty, but it’s really artistry. She learned to crochet and now makes everything from hats to scarves to rugs. She bought a giant bag of random broaches and pendants (for only $25) and now every time someone comes over, they leave with a piece of jewelry or two that Amanda’s made by repurposing the stuff in the bag. Why? Because she can. Because It’s fun. and because she loves to make and give people gifts.

Amanda’s artistry shines through in her crafts, her clothes, her decorating, her cooking – basically everywhere.

There you have it! Only 6 of the many and various reasons I am so grateful I married the best woman in the world!

YOUR TURN: What do YOU love about Amanda? Feel free to submit your answer in the form of a poem!

Baptists Don’t Dance (or: Finding Where You Fit)Influence
The Crab SafariInfluence, Pop Culture