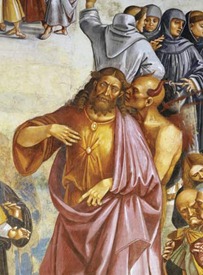 What do we (usually) think?

The Antichrist is a person (probably a man) who will take the world stage. His rule will signal the End of Time. That’s where the agreement ends and speculation starts running rampant. We build our pictures from several Biblical texts – two of the most popular are the Man of Lawlessness in 2 Thessalonians (I love that Eugene Peterson calls him the ‘Anarchist’) and the Beast from the Sea of Revelation 13.

What questions do we ask?

Everyone wants to know who the Antichrist is. Is he European? Maybe from the Middle East? Is he a president or a church leader? He’s going to be eloquent, right? And tricky… I think he’s supposed to trick everyone into following him.

We want to know these things because we want to be able to recognize this Antichrist when he appears.

So what do the Scriptures tell us about this Antichrist? How will we be able to recognize him? Is the Antichrist even a him?

What’s the Biblical picture of the Antichrist? 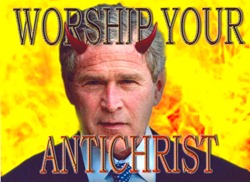 So first, what does the Bible say about the Antichrist? The title itself says it all – the name Antichrist is a transliteration of the Greek term used in John’s letters. Anti-christ. Anti-messiah. Anti-Jesus. It means the same thing today it did back then. Read for yourself:

Children, it is the last hour! As you have heard that antichrist is coming, so now many antichrists have come. From this we know that it is the last hour. They went out from us, but they did not belong to us; for if they had belonged to us, they would have remained with us. But by going out they made it plain that none of them belongs to us… Who is the liar but the one who denies that Jesus is the Christ? This is the antichrist, the one who denies the Father and the Son. — 1 John 2:18-22 (NRSV)

A big question for John’s community is Who is teaching a true picture of Jesus?

Apparently, there were lots of teachers travelling around presenting false pictures of Jesus and the letter-writer will have no more of it. He expects his community to be aware, and constantly on guard:

Beloved, do not believe every spirit, but test the spirits to see whether they are from God; for many false prophets have gone out into the world. By this you know the Spirit of God: every spirit that confesses that Jesus Christ has come in the flesh is from God, and every spirit that does not confess Jesus is not from God. And this is the spirit of the antichrist, of which you have heard that it is coming; and now it is already in the world. — 1 John 4:1-3 (NRSV)

What’s interesting is that – according to John – many antichrists are already in the world. And they came from within the Church.

They weren’t evil political leaders who were trying to take over the world. They were trying to lead the Church to believe a false picture of Jesus. And that’s literally the only place in the Bible the word “Antichrist” appears. Which is why we have to ask the second question now…

What does the Bible say about a political leader at the End of Days?

Since the days of the Hebrew prophets, God’s people has looked for a final conflict between God and earthly rulers. The Hebrew prophets called this the Day of the LORD (which could be rendered Yahweh’s Day). This would be the day God comes back and establish God’s kingdom – put and end once and for all to injustice and evil.

And for about as long as we’ve been imagining the Day of the LORD, longing for it and hoping it comes, we’ve wondered who will lead the forces of Evil against God and God’s people. The Scriptures describe this leader with several metaphors – Ezekiel calls him Magog, king of Gog. In 2 Thessalonians, he’s the Man of Lawlessness/Anarchist. In the Revelation he’s the Sea Beast, which is explicitly identified as the Roman Empire in Revelation 17:9.

Every time the Bible discusses an End-of-Days ruler, that person is presented as the leader of an anti-Kingdom. Easy to see why that person got lumped in with the Antichrist(s). Anyone who is opposed to God and to God’s kingdom is an antichrist. So several nations in Ezekiel’s day were antichrists, and their rulers were antichrists. The Roman Empire was certainly antichrist (given that they executed Christ… pretty much seals the deal). Osama bin Laden was a self-proclaimed antichrist. But those are the easy spots. And while they are good to keep our eye on, the Scriptures don’t warn us to watch out for them.

The Bible recognizes the inevitability of rulers and kingdoms who will be anti-Christ. But we are warned to be concerned with the anti-Christs inside the Church, not outside.

The End will come when it comes. And when it comes, there will be rulers and nations that violently oppose God and God’s people. But that has been true since Jesus was crucified. That’s been true since God had a people. Should we really spin our wheels trying to pin down the identity of the Anarchist? Not according to the Scriptures.

According to the Bible, we should be testing the Spirit of those who are a part of our churches. Those who teach and lead. Those who claim to represent Jesus to us and with us. Because not everyone who claims to be a part of the Church truly represents Christ. Some within the Church embody the spirit of the Antichrist.

We should be asking Who is teaching me? What picture of Jesus are they presenting? Is this a faithful representation of the Jesus I meet in the Scriptures? Is this Christ s/he is teaching the Christ who died and rose from the dead?*

We should spend less time trying to identify “the Antichrist” and more time understanding who Jesus is so that we recognize falsehood when we see it.

Do you think it’s appropriate to label ‘Antichrists’? When, if ever? And how do you decide who is anti-Christ?

*Needless to say, if the only source of teaching in your life is that singular teacher, you’ll have no idea whether they are teaching Christ truthfully or not. That’s why Spiritual Practices are so important, as well as reading broadly and getting as much input as possible from other sources.

A Visit From the Goon Squad - Book Review