Yes, I’m reviewing a film. Which means yes, there are spoilers.

127 Hours tells the story of Aron Ralston, a climber in his mid-30s who in 2003 was forced to amputate his own arm when he was accidentally pinned by a rock while canyoning in Utah. Ralston is played marvelously by James Franco, who is quickly becoming one of my favorite new stars. Since Ralston was such a loner, Franco carries the movie alone – he’s in more than 90% of the film by himself. Together with director Danny Boyle (Slumdog Millionaire, 28 Days Later, Trainspotting), Franco invites us into Ralston’s death and rebirth in Bluejohn Canyon, Utah.

The film opens on Ralston leaving for a weekend hike, accidentally (and ominously) leaving his Swiss-Army knife behind. The first moments of the film are choked with product placement as if to emphasize the total lack of human contact into which Ralston travels. From his truck, he bikes nearly 20 miles to Bluejohn Canyon, meeting a couple of lost girls along the way, introducing himself as a guide and helping them find their way. He snaps a picture to remember them and gets back on track, heading to the canyon.

The accident happens blink-and-you’ll-miss-it fast after nerve-wracking, you-know-what’s-going-to-happen-but-not-when foreshadowing. Ralston is running along the canyon rim and suddenly slips, falling and landing miraculously on his feet and unharmed excepting the boulder that has fallen and is wedged between the canyon walls, his arm trapped. It doesn’t take him long to realize he’s well and truly stuck. And alone. 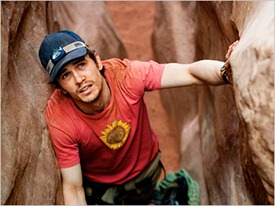 Ralston has little food and less than a Nalgene full of water. He’s not dressed to stay warm in the Utah desert’s cool nights. And he didn’t tell anyone where he was going. In a series of flashbacks we see as the days progress, we learn that Ralston structured his life to be overly self-sufficient. He didn’t tell his boss where he was hiking, only that he was taking the weekend off. He didn’t talk to his parents. He seemed not to have any close friends.

As the days progress and he cannot move the boulder, nor even chip away at it with the cheap multi-purpose tool he carried, Ralston makes an early attempt to amputate his arm, but when the small, very dull knife (on the tool) strikes his bone, he realizes the tool can’t cut through the bone and despairs. It’s at this point that Ralston despairs utterly of escape. He realizes that he is going to die pinned to the canyon wall, and that way he’s chosen to live his life – alone, independent, as ‘guide’ but never ‘guided’ have brought him to this place. He’s killed himself, albeit unintentionally. 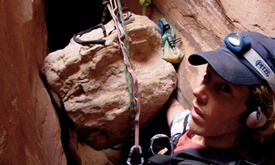 The climax of the film is every bit as bloody and gruesome as you can imagine, and Boyle does not shy away from showing us exactly what it cost Aron Ralston to live again. In and out of delierum, dying of thirst, Ralston has visions of the girl he wouldn’t let love him, the family and friends he’s kept at arm’s length and a son he does not have. In Franco’s performance, Ralston’s desire to live, to atone is visceral and palpable. Ralston realizes that he can use the boulder to break the bones in his arm, and the multi-tool will do the rest, so he sets about amputating his arm. (Allegedly, quite a few have passed out watching this scene in theaters, so be warned: it’s not for the faint of heart!) 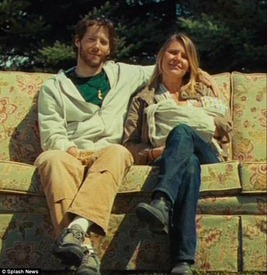 Putting his severed stump into a sling (and with a tourniquet in place), Ralston makes a run for freedom, and under Boyle’s direction, Bluejohn Canyon becomes the birth canal from which Aron Ralston emerges a new man. The moment he emerges from the canyon into bright, pure sunlight (beautifully scored by Sigur Ros) is powerful and transcendent, a fantastic nativity made all the more poignant because Ralston still has so far to go. He finally discovers a family of hikers who are able to relay his position to rescuers, who send a helicopter. The flim closes with a shot of Aron and his wife, Jessica, whom he met three years later. Jessica is holding their newborn son.

127 Hours is a compelling parable about the danger of living life without community; in that way it reminded me of Into the Wild. We often glamorize guys like Aron Ralston (and let’s be real, any dude who can cut his own arm off is way more awesome than I am) for their independence and cavalier attitude towards life. But Aron found where that sort of life ultimately leads. The truth is, we need each other. We were designed to live in community, not alone.

Bottom line: The movie is gruesome but beautiful. It’s a great warning against too much individualism made all the more fascinating because it’s true.