On Tuesday, November 16 we got a real treat – Father Gregory, a Dominican who shares my love of Zombie fiction, took us to the Notre Dame Pilgrim House where we joined a group on the roof for a look around the city.  From the top of Notre Dame, we could see:

It was pretty incredible to see all those pieces of Salvation History from that one location, and amazing to think that it all happened within just a few miles of land.

After our tour, we made our way by taxi to Bethlehem, which isn’t very far, except that – since Bethlehem is a Palestinian territory, we had to cross through an Israeli checkpoint.  We got to Manger Square with only a little hassle (our cab driver tried to take us to a store because if we bought something he got commission).  I was surprised at how plain the Church of the Nativity appears from the outside.  It’s huge, but not very ornate.

The Church dates clear back as far as we have records.  St. Jerome (the one who wrote the Vulgate) came here in the 4th century and made this church his home and office (which, if you’re taking notes, means he wrote the Vulgate here).  The current church building has been built over the old site, and the original 4th century mosaic floors have been preserved under trap-doors they open during visiting hours.  The network of caves that originally provided the ‘back room’ of the 1st century Bethlehem homes are now under the building, along with Jerome’s office (now a chapel) and tomb, both also in caves.  After wandering through the cavernous chapel, we headed downstairs (accidentally cutting in front of about 1,000 or so pilgrims because we used the exit stairs. That’s what they get for poor signage).

As I’d come to expect in Jerusalem, the original cave has been transformed into a shrine.  Pilgrims come down the stairs in a line and kneel under an altar, kissing the star that surrounds a hole through which you can touch the actual cave floor.  Just behind the kneeling pilgrims is a second altar that marks where the manger sat, where Jesus was laid after he was born on the hard cave floor.

It’s hard to describe what it meant to stand in the place where Jesus was born.  This was the spot where the impossible happened.  Where God became a person.  Two things that couldn’t be joined – the divine and the human – became one, without compromising, without cheating either the godhood or the humanity of Jesus.  It’s what we call the

Incarnation – the ‘enfleshment’ of Jesus.  Even while we – the whole human race – were enemies with God, God became one of us.  God crossed the uncrossable boundary not to make war on us, but to bring us peace.  That’s what we celebrate at Advent (coming up in just a couple of weeks!): Jesus coming into our mess and saving us, rescuing us.  That’s Good News.

It’s the great mystery of the Church, that which makes our faith possible.

These are the thoughts that filled my mind and heart as we set out to return to Jerusalem.  We stopped in an excellent olive wood souvenir store owned by some Arab Christians on our way out, and they gave us instructions on how to get back into Jerusalem.  We took a taxi to the checkpoint and then had to walk through.  Being Western (read: white with American passports), we were waved through at ever point, while Arabs were detained at every point.

Once on the other side, we asked several people which bus would take us to the Old City and kept getting different answers.  Was it Bus 74 or Bus 21?  We finally got on 21 and as we passed several girls wearing headscarves, everything clicked into place.  There are two different bus systems in Jerusalem (though I think it’s unofficial) – the Arab and Jewish buses.  This confirmed for me everything I’d been feeling since our failed trip to Bethany.

I have found it easy to feel sorry for the Palestinians in Israel; they’re essentially living in an Apartheid system.  And when I see the huge walls the Israelis have built to keep the Palestinians locked away and controlled, I can’t help but wonder how they forgot so quickly about the Warsaw ghettos.  But the truth is, if the situations were reversed, and the Arabs had power, they wouldn’t treat the Jews any better.  As one of the priests here said,

It seems like everything in Jerusalem is divided.  The Old City is broken into clearly discernable quarters.  The buses.  The checkpoints and walls.  And so I wondered as Thomas and I journeyed back from The House of Bread (that’s what Bethlehem means in Hebrew) to the City of Peace (Jerusalem) where the Bread of Life was broken to purchase peace for the world. 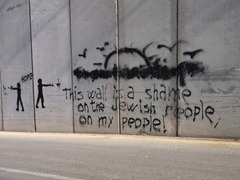 I believe that the walls in Israel can be torn down and used to build homes and that Jews and Arabs and Americans can all learn not just to tolerate but love each other.  Because if God can become human, then anything’s possible.

As we were walking back into Jerusalem, we saw some shepherds in the hills, tending their sheep.  They reminded me of a story I heard once… 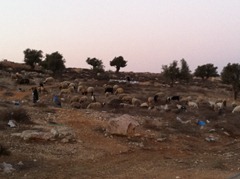 There were shepherds living out in the fields nearby, keeping watch over their flocks at night.  An angel of the Lord appeared to them, and the glory of the Lord shone around them, and they were terrified.  But the angel said to them, “Do not be afraid. I bring you good news of great joy that will be for all the people.  Today in the town of David a Savior has been born to you; he is Christ the Lord.  This will be a sign to you: You will find a baby wrapped in cloths and lying in a manger.”  Suddenly a great company of the heavenly host appeared with the angel, praising God and saying, “Glory to God in the highest, and on earth peace to humanity on whom his favor rests.” 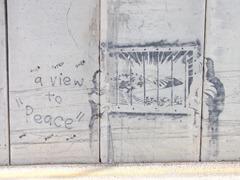 When the angels had left them and gone into heaven, the shepherds said to one another, “Let’s go to Bethlehem and see this thing that has happened, which the Lord has told us about.”  So they hurried off and found Mary and Joseph, and the baby, who was lying in the manger.  When they had seen him, they spread the word concerning what had been told them about this child, and all who heard it were amazed at what the shepherds said to them.

May the Peace of Christ that passes all understanding rule in your hearts and in our world.