Or: What The King’s Speech’s Oscar win tells us about our refusal to take responsibility

The Oscars have been over for a week now, and most people have probably forgotten that The King’s Speech beat out quite a few other (and in my opinion, more deserving) pictures, including my choice, 127 Hours. My friend Andrew posted last week about why he thinks The King’s Speech deserved the win (if you haven’t read his thoughts, do yourself a favor and click on over there!). Without belaboring the argument any further, I want to reflect for a few moments on how The King’s Speech’s win reflects a troublesome pattern in our culture. 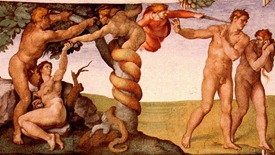 All the Best Picture nominations this year dealt with growing up in some form or another. And, as I mentioned in my last post, they don’t all share quite the same tone with regards to maturing. While most of the films tended towards the bittersweet (Toy Story 3, Winter’s Bone, The Kids Are All Right), a few took a hard look at the cost of stepping into adulthood – most notably True Grit, Black Swan, and 127 Hours. Nearly all the films share the same take on growing up, namely that

What separates the films is how this theme plays out. The King’s Speech (among other of the ‘lighter’ films) treats this the way we all want it to – sometimes bad things happen to us. It’s inevitable. Often, it’s even our own families and friends that hurt us the most. But – as Andrew said – being an adult is about ‘ponying up’ and doing what you have to despite the hurdles. Bertie’s stammer developed under his overbearing father and suave older brother. In the end, he just had to adopt a Yes We Can mentality (with the aid of his loving wife and new friend and mentor) and Just Do What Had to Be Done.

We like this message because it confirms what we already knew – that deep down we’re wonderful people. The pains and pitfalls in our lives are somebody else’s fault (someone call Oprah!) and once we come to grips with that, we can overcome any and all obstacles in our way.

This is a good story, but it’s not complete. And the darker nominees don’t let us off so easily.

True Grit’s Mattie is a child playing adult – even dressing up in her father’s clothes – until the moment she kills. That singular choice catapults her (literally) into the grown-up reality to which she’s been pretending the whole film.

Black Swan’s Nina (Spanish for ‘little girl’) embodies the beauty and perfection of childhood innocence. Precisely because she is innocent, she cannot dance the sensual and seductive role of the Black Swan. Her journey is one of self-discovery that ends when she embraces her (adult) sexuality, falling from innocence and sealing her fate with murder.

127 Hours’ Aron Ralston was the sort of guy-stuck-in-extended-adolescence who has garnered quite a lot of talk recently. After his fall, Aron reflects in the film that the choices he’d made thus far in his life – to be self-sufficient, to live alone, had brought him to Blue John Canyon and trapped him beneath the rock. His literal fall was the inevitable outworking of his metaphorical fall.

The characters in these films made their own beds – anything that was done to them by others (Tom Chaney murdering Mattie’s father or Nina’s overbearing and overprotective mother, for instance) was secondary at best to the choices they made for themselves. And it was their own choices that damned them.

Mattie and Aron each lost an arm in their Valleys of the Shadow of Death, while Nina died as a result of her choices. And other messages in the films aside – they’re each rich and wonderfully complex – this is something our culture doesn’t want to hear.

We like having someone else to blame for our problems. We like never having to take responsibility for the choices we make (and how they damage other people). We want to believe that we can live in some sort of mythical consequence-free world but at some point we need to step into reality and admit that at the end of the day, the only person I can blame for the live I live is me.

Sometimes (probably more often than we’re comfortable admitting), your life is your own fault. You can blame anyone you want, but at the end of the day, when the chips are down, you make your own choices. You write your own story. And no one else is going to be accountable for your life but you.

So, in the words of the great Andy Dufresne, “Get busy living or get busy dying.”

Just how we do that, what ‘growing up’ entails is something I want to explore over the next several weeks with you. What does growing up cost us? Is it always a good thing?

For now, what do you think ‘growing up’ entails? How is it essentially different from childhood (or is it?) And is this a good or a bad thing?

The Best Picture: What Should've Won