Someone at HarperCollins just got a raise. A couple of weeks ago, they ‘leaked’ a promo for Rob Bell’s new book, Love Wins, and basically exploded the internet. The book claims to take on our ideas of Heaven and Hell, but it’s really, foundationally, about who we understand God to be. Before the book even came out, lots of guys were calling Bell a heretic (which they’d already been doing anyway) and those who defend Bell responded in kind. I’m going to stay out of the mud-slinging and just talk about the book. So here goes…

If you’ve never read a Rob Bell book, you’re doing yourself a disservice. Bell has the uncanny ability to pack a million pounds of meaning into a couple of sentences that are as easy to read and understandable as anything you’d read in a pop fiction novel. And his approach to the scriptures can only be called an art – it’s clever, subtle and original. Love Wins is no different. In this book, Bell’s fundamental question is about the nature of reality – are we living in a comedy or a tragedy?

Bell believes that the universe has a happy ending (which should not be a surprise, given the book’s title, right?)

Bell opens with two chapters on Heaven and Hell, and argues the same about both: Heaven and Hell are realities that are happening now and will extend into eternity. We can participate in Heaven now. Or we can choose to make Hell. His case here is built on good, strong exploration of Biblical texts and he raises a number of great questions.

Bell flips the question of Eternity on its head – Christianity is less about where you go when you die and more about “dragging the future into the present.”

This theme is one of Bell’s strongest and clearest: that Heaven and Hell are not places we go after we die, but essentially, primarily modes of living here and now. I was reminded strongly of another of my favorite books, C.S. Lewis’ The Great Divorce:

Imagine being a racist in heaven-on-earth, sitting down at the great feast and realizing that you’re sitting next to them. Those people. The ones you’ve despised for years… Jesus makes no promises that in the blink of an eye we will suddenly become totally different people who have vastly different tastes, attitudes, and perspectives.

From there, Bell moves into the realm of speculation. He freely, readily admits that he’s leaving the space in which the Bible speaks clearly and asks Does Hell last forever? In short, Bell hopes not. While affirming the reality of Hell and the fact that people will go there, he offers up the hope that Hell – precisely as punishment – will be corrective, that God’s endlessly persistent love will “melt even the hardest hearts.” This is the chapter of the book that caused all the waves, so I just want to point out that

Bell can say that Hell isn’t necessarily eternal and still be well within the bounds of Orthodoxy. You can disagree, but you can’t call him a heretic.

The next section of the book was the most challenging to me, and also my favorite. Bell turns to the question, Is Jesus the only way? His answer (as you might expect) is Yes, but not in the way you probably think. Bell takes a hard look at how the Scriptures describe Jesus, digging deep into the mystery of the Incarnation. According to the Scriptures, Jesus is the embodiment of the creative Word of God – the word that said Let there be light and created light. Jesus created everything that exists and works all the time to sustain everything. 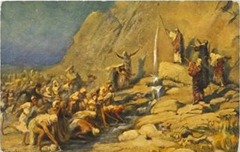 So according to the Scriptures, Jesus is everywhere, working all the time. And if that’s true, then Bell suggests that Jesus might bring people to God in tons of other ways that are not necessarily through the historic, orthodox Church. Still through Jesus, but not through the Church. On second thought, this was the section that made everyone mad.

None of us have cornered the market on Jesus, and none of us ever will… Whatever categories have been created, whatever biases are hanging like a mist in the air, whatever labels and assumptions have gone unchecked and untested, he continually defies, destroys, and disregards.

At the root of all the anger over Love Wins is plain old-fashioned control issues – we want to be the final arbiter of who’s in and who’s out. But Bell says Jesus gets to save whomever Jesus wants. It’s not up to us.

Love Wins wraps up with a poetic exploration of the Prodigal Son that I won’t ruin here. Suffice to say, it’s worth the read, and you get the clear sense that Bell planned to cause such a stir precisely so he could illustrate exactly what he’s talking about – sometimes ‘goodness’ is a problem:

Bell’s book is a lot to chew on; it’ll certainly reward several close readings. But it is well within the bounds of Orthodox Christianity, and asks some very good questions (it’s far outside the bounds of Orthodox New Calvinism, and some people mistake that for the whole of the Christian tradition, but rest assured they’re deluded). We need to be talking about Heaven, Hell and the picture of God that lies behind them. It’s a fun read and very accessible.

Bottom Line: Bell took a bunch of abstract theological questions and dragged them out in the light so we can all talk about them. So get going! And remember to have fun and play nice.